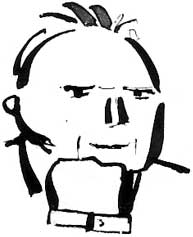 Anthony Haden-Guest is a writer, reporter and cartoonist.

He was born in Paris and lives in New York and London.

He has published in leading magazines in Britain and America, most recently inEsquire and GQ  (UK) and Britain’sObserver Magazine.

In 1979 he was awarded a New York Emmy for writing and narrating a documentary, The Affluent Immigrants (sometimes less politely known as Eurotrash) for PBS.

His most recent books are True Colors: The Real Life of the Art World (Grove Atlantic), The Last Party: Studio 54, Disco and the Culture of the Night (William Morrow & Co,) and a book of cartoons,The Chronicles of Now (The Allworth Press), as well as the latest: In The Mean Time (Frieght Volume).