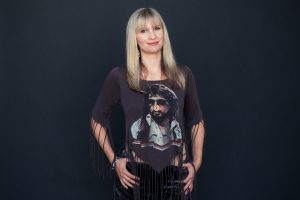 Alysha Main is a Music Supervisor, DJ, and Podcaster based in Hamilton ON Canada. She has been working in the entertainment industry for 20 years in Artist Management, Event Promotion, Sales, Marketing, and DJing. In 2017 she made the shift to the film industry, studying Music Supervision at Berklee College of Music. She is also an event DJ, host of “Put A Record On” on 93.3 CFMU, and creator of the “Hamilton Film” podcast.

Her secret weapon in music for film is her husband, songwriter/multi-instrumentalist Chris Altmann. Chris has embraced many musical styles; from country rock group The Drowners, to the more modern pop/rock sound of The Vandas, and onto a solo career steeped in Americana. Chris is also an in-demand session player, appearing on dozens of recordings, and a touring musician performing with Tim Hicks, Blue Rodeo, Henry Wagons, and Michelle McAdorey, among many others. He has been nominated twice by the Canadian Country Music Association for ‘Pedal Steel Guitar Player of the Year’.

Together, Alysha and Chris collaborate on film & TV projects. Chris’s music has been used in the popular Australian TV shows Home & Away, and Neighbours, and independent films including I’ll Take Your Dead, Beneath, and Vicious Fun.