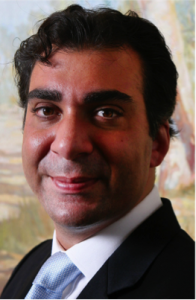 Brandon Bakshi is the Executive Director of Writer/Publisher Relations for Europe & Asia. and is based in BMI’s London office.

In this role, Mr. Bakshi oversees the outreach and relationship management among the international songwriting and publishing community. He is responsible for engaging new and current songwriters, composers, and music publishers and he manages the various BMI programs and events within his territory. Some of his most well known events include the BMI London Awards, Royal Academy of Music BMI Student Bursary Award, the BMI/C2W International Songwriters Camps in the Caribbean, the BMI @ Abbey Road Songwriter Sessions, as well as the American School of London’s ‘Battle of the Bands.’

Prior to his appointment as Executive Director, Mr. Bakshi held the title of Senior Executive, Writer/Publisher Relations. A 21-year veteran of BMI, he began as an intern in BMI’s London office. Mr. Bakshi gained extensive experience at BMI where he has broadened his skills by working in alternate departments such as Performing Rights and Government Relations in BMI’s New York office.

While at BMI, he has been responsible for the signing of Daft Punk, Pete Townshend, Queen, Sade, Afrojack, Deadmau5, One Direction, Shaggy, Avicci as well as Ellie Goulding. He has been a past speaker and moderator at the Winter Music Conference,

Amsterdam Dance Event as well a the Music Managers Forum.

Mr. Bakshi received his Bachelor of Arts in Political Economy from International American University. He earned his M.B.A. from Webster University School of Business & Technology as well ongoing executive education at the London Business School. Although Brandon was born in Houston, Texas, he was raised between England and Norway for most of his life.