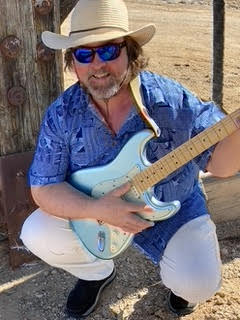 From an early age, music has been my life. I started singing for family and friends when I was five years old and have been at it ever since. For several years, I studied the piano and my true love, the guitar. At 15 I started performing at underground coffee houses in the basements of Boston area churches and later with rock bands, a soul/funk band and a duo that received a lot of local attention. Moving on to Las Vegas to further my songwriting and solo performing career, I played at the Fremont hotel downtown and resorts on the Strip.

A passion for social activism, both global and local, has been a strong influence on my music. I produced music videos for End of Fear, about the Arab Spring movement in Egypt and Not Like Me, a song that illuminated the humanity of the homelessness crisis in the U.S. I also have performed at a number of rallies and organized social justice actions across the U.S.

My composing and songwriting career spans decades and several genres most notably rock, folk and jazz fusion including instrumental and lyrical compositions. My music has appeared in independent films and network television and cable shows and has earned several industry awards including the ASCAP Plus Award in 2011 & 2012, Finalist in the 2011 UK National Songwriting Contest, Best Male Vocalist in the 2006 Southern California Music Awards, a Billboard Song Contest Winner in November 2006 and the VH-1 Save the Planet, Song of the Year Award in 2005. My music has also appeared in more that 160 student film productions in connection with the Campus Movie Fest, a competition for college film makers. My music is currently playing in two major TV shows.

Currently, I live and work in southern California, not far from Los Angeles where I am busy producing music in my studio and performing at local venues.