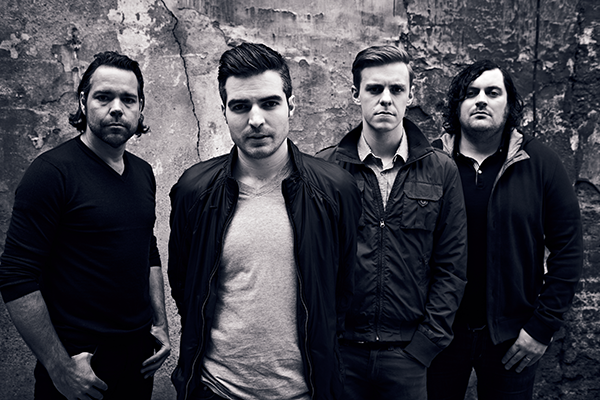 About The Boxer Rebellion

For London-based rock band The Boxer Rebellion, the second time was a charm when it came to writing their new album, Promises. Two years ago, not long after the release of their 2011 disc The Cold Still, the band started penning new demos while at home in London that Winter, feeling their way back into the writing process. That early batch of ideas was thrown completely away, mostly because the musicians experienced a significant change in direction after they toured The Cold Still more extensively.

“The experience of touring the last album was magnificent and very emotional,” singer and principle songwriter Nathan Nicholson said. “When we came off the road we went straight back to the studio to write – very much with the live show in mind. We wanted this album to fill the room with a different type of energy – still emotional and provocative, but at the same time uplifting, ambitious, positive, and far bigger than the sum of its parts.” In January of 2012, the band had made enough money through touring and record sales to secure their own writing and recording studio and that summer began laying down the initial versions of the songs on Promises.

“Having a new setup like that completely changed the way we wrote,” drummer Piers Hewitt says. “No more packing down our gear at the end of every session to make way for another band, only to set it all up again the next morning. We’ve been doing that for almost 10 years! To have a space we could call our own meant we could write from the ground up rather than write whole songs in one go. Our previous albums were written without the luxury of time to really explore and finesse the songs, and we were determined to not let that happen this time. We’re all really proud of The Cold Still, but I think we all agreed early on that we wanted to push into new areas – musically, lyrically, and sonically. We wanted to harness more melody, a wider palette of sounds, and much more of that live energy and immediacy we deliver while on a stage.”

“It also meant we could write a lot more to drum loops or patterns that either Piers or Todd [Howe] conceived, rather than how we’ve written traditionally – with me bringing a song in written on an acoustic guitar and with the tempo set in stone from birth,” Nicholson adds. Throughout the rest of the year, the four musicians wrote and laid down demos lead by a constantly moving deadline, focusing on exploring and cultivating their newfound sensibility. They initially planned to use their own studio recordings as the final tracks but eventually felt like they needed someone to produce the album with.

“We felt we really needed (producer) Billy Bush’s involvement because we wanted this album to SOUND amazing – whether in headphones, through the TV or on crappy laptop speakers. We always felt the songs were there – we had worked on them long enough to know that – but the sonic of this album, and getting it right, was always a priority,” says Nicholson. “We also felt we’d be wise to take these songs and ourselves away from our daily lives and distractions. We’d been locked in that basement for close to a year, and the idea of actually being thousands of miles away to focus completely on getting the album finished was paramount. We love having a London studio, but it’s in the middle of the city in a basement, in a pretty grey part of town. And during the dead of a British winter, well, it’s just not the same as being creative in the Californian sun! So we called on Billy, who was just finishing a tour with Garbage at the time, and that was it – right after the Christmas break we booked our flights. We found an apartment in Los Angeles at the corner of Fountain and N. Bronson where we lived for a month. We were like a little family – having breakfast together, making lunch together, going to the grocery store together! We’ve been on the road for years but it’s different to life in a van with ever-changing hotel rooms. This was the first time we actually LIVED together, which actually put us all in a great mental space to work hard and fast.”

“Once we arrived in LA we spent our first week in a studio called Mates so we could learn how to play the songs from start to finish as a band,” Nicholson says. “It all fell into place so quickly that we cut the week short and moved into Sound Factory with Billy to begin recording with the focus initially being on drums, bass, and piano. For the first time we actually had a drum technician, Mike Fasano. The man is a wizard at knowing which drums would deliver the sounds we wanted. He is, for lack of a better term, a drum alchemist. Mike and Billy made sure Piers had effectively an entire store of drums and cymbals to play with. We then moved over to the much more intimate setting of Billy’s studio in Atwater Village to track remaining guitars and vocals.”

The resulting album, while still true to The Boxer Rebellion’s signature sound, pushes the boundaries set by the group’s previous three albums, drawing from the urgency of debut album Exits, the melodies and epic soundscapes of the Billboard chart-breaking Union, and the maturity of songwriting and musicianship displayed on The Cold Still.

“We want to always progress musically and never make the same record twice,” Hewitt adds. And having learnt so much since we decided to do things on our own terms, on our own label, we can confidently have great ambitions for this album. I think that’s important especially when you’ve been touring and recording for so many years – you have tons of lessons to draw from. And aside from all of that, we’ve grown up so much in the last five years, collectively and individually, and you can hear that on this record.”

From the surging album opener, “Diamonds,” a lush, retro, indie rocker, to the electro-rooted “Fragile” and “Take Me Back,” the disc reveals a staggering array of musical layers. “You Belong To Me,” which Hewitt feels is one of the most relatable songs on the album, is a quietly emotive piano-led number, showcasing the band’s more introspective musical aesthetic, while tracks “Keep Moving” and “Always” deliver tremendously addictive melody and momentum throughout. Despite the record’s notable variety, a singular cohesion can be found in its complexity and emotional weight – it is, after all, music created by the same four guys – a fact the band reminds us of by closing the album with its namesake “Promises,” a thoroughly live and honest indie-rock spectacle.

Promises, the band’s fourth album released on their own Absentee Recordings label, is another evolutionary step in The Boxer Rebellion’s ever-burgeoning career. After their first label (a subdivision of Mercury/Universal) imploded just after the release of 2005’s Exits, the foursome has continually overcome all odds, carving a path for themselves as a wholly-independent act with an ever-growing international fanbase. The band’s ability to push on and continue writing, recording, and touring has shaped their attitude, allowing them to be grateful for every achievement that’s come to pass in the years that have followed.

“Our fans are our life-blood. We know plenty on a first-name basis and we see them and hang at the merch stall after gigs, just like we did all those years ago,” Hewitt says. The only difference being that now there’s a whole lot more of them … from Tokyo to Mexico City. It’s truly a beautiful thing.”