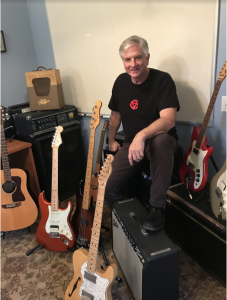 Chet Kane is a singer, songwriter and bassist who got his start playing bass in Seattle art rock band The Botticelli’s. Chet eventually got involved with Seattle’s Belltown music scene in the mid ‘80s, holding down bass duties with folk-country-punk rock poet Gary Heffern and The Cunninghams.

In the early ’90s Chet released his debut solo album Tears for Columbia with Germany’s Glitterhouse Records in Europe. The songs on Tears for Columbia draw their inspiration from the surrounding environment; the landscape and natural beauty that is abundant in the Pacific Northwest juxtaposed with modern urban settings. Chet’s songs have also appeared in two Glitterhouse compilation albums Speed of The Sound of Loneliness and Silos and Utility Sheds in 1995.

Home is available at drumsandwiresrecordings.com/chet-kane