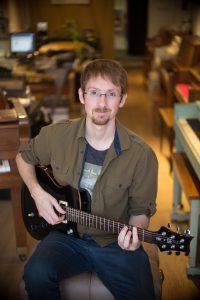 Dan Luedke is a guitarist/producer and music publisher based in Minneapolis. As a guitarist/producer, his music has been heard on TV shows around the world including CBS’s Thursday Night Football and The Daily Show with Trevor Noah. He is also one half of the electronic music duo LUEDVIG, who’s written for commercial brands such as Hyundai and Hy-Vee.