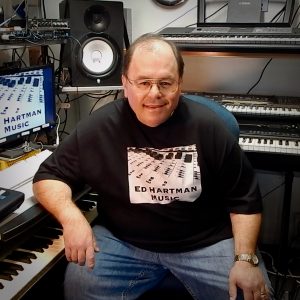 Ed Hartman is an award-winning, accomplished composer, performer, and educator. Ed  received his Bachelor of Music from Indiana University, and has been involved with the  film and music communities in the Pacific Northwest for decades. He creates music  drawn from many styles, genres and cultures. Ed is at home with classical orchestral  music, along with electronic, jazz and world music. As a percussionist, he can create  intense rhythmic scores that can contrast with lyrical orchestral passages.

Ed also owns 8th Sense Productions, LLC that owns the film-estate of Richard Lyford.  He produced and scored “As the Earth Turns” an award-winning unreleased silent sci-fi  film by Lyford made in Seattle in 1938, , an award-winning documentary about Richard  Lyford, “It Gets in Your Blood”, and is currently working on a biopic about the filmmaker.

Ed Hartman has been teaching classes in music licensing for over a decade and has  been creating music for film, T.V., radio, and even a planetarium. Ed’s music has been  heard in the motion pictures, including “The Blind Side” and “Scooby Doo, The  Mystery Begins” (Warner Bros.), “The Cold Light of Day” (Summit Ent.), “Surviving  Christmas” (Dreamworks), “Into the Fire” (BCDF Pictures), “Spirit of the  Game” (Samuel Goldwyn), “A Different Sun” (Monolith Pictures), “Cool It” (1019  Ent.), “Mini’s First Time” (Bold Films), and “The Turkey Bowl”(Coolidge/Ward  Productions).

As a film-composer, Ed scored award-winning music for the feature-film “As the Earth  Turns”, “Fitz” (Who Made Who Productions) – 2008 Alberta Film and Television Awards  Nominee: Best Feature Film) and the documentary: “Project Colombia” (The  MapMakers). Ed has also scored a variety of short films, including: “DACA, the Story  of Dreamers,” “SHAM Therapy” (Web-series), “The Son, The Father”, “Pause”,  “Little Peter Needs to Fly”, “End Zone“, “The Three Stars”, “Trauma”, “Winston”,  “Those in Need”, and “A Rich Mann”.