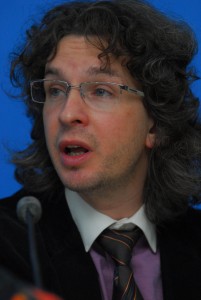 Eugene Efuni is a producer, director and writer. He started his entertainment career in 2001, as a co-producer of the fantasy feature film “Barbarian” produced by Roger Corman (a legendary Hollywood producer who discovered talents such as Francis Ford Coppola, Jack Nicholson, Ron Howard and many others). And since then Eugene Efuni has produced 6 independent American and international feature films, such as Iris Effect starring Anne Archer, Agnes Bruckner and Mia Kirshner; The Second Front starring Craig Sheffer, Todd Field and Ron Perelman, Mirror Wars starring Malcolm McDowell, Armand Assante and Rutger Hauer – with budgets ranging from $600,000 to $10 million.

He has also produced and directed a number of commercials (including the commercials “Forex4All” shown on Bloomberg TV) and music videos. He wrote a screenplay for the feature film “The Keeper of Time” produced by Roger Corman. Eugene Efuni was a founder and producer of a well-known American 3D animation studio in Ukraine – Umbrella Animation/Umbrella Vision where he developed 3D animated feature film “Paws & Wires”. Mr. Efuni has produced one of the first s3D films shot in the Eastern Europe “Rzhevsky vs Napoleon! 3D!”, which was theatrically released in Russia and Ukraine on 940 screens in 2012 becoming a box office leader in the first week of its release and grossing over $13 million.