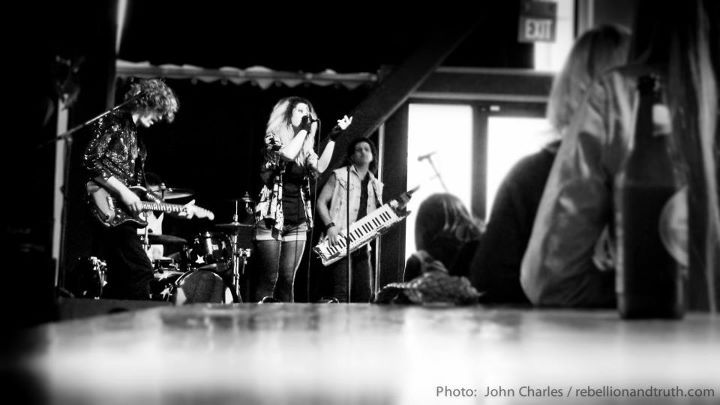 Fire Tiger is a retro power pop / classic rock band from Los Angeles, fronted by contralto singer / songwriter Tiff Alkouri, along with co-writer / keyboardist James Ramsey, guitarist Jordan Lucas, bassist Tyler Renga, and drummer Lorenzo Meynardi. Since their debut 10-song vinyl record album ‘Energy’ (2014), and their 2018 follow-up albums, ‘Suddenly Heavenly’ (2018) and ‘All the Time’ (2020), they have been gathering a notable indie following. Their songs aim to capture the nostalgic musical quality attributed to the 80s and late 70s, and bring it back to the mainstream…

“They are the only ones to offer this kind of music. Led by the very beautiful voice of singer Tiff Alkouri, our friends could have composed the soundtrack of American teen movies from the 80s. It’s pop, rock sometimes variety but it remains very anchored in a certain FM of those years.”
– Fab, Rock Meeting (Oct 13, 2020)

“Fire Tiger delivers another great album in the middle of a pandemic and it’s just what the doctor ordered! They’re a Los Angeles based retro power pop / classic rock band playing original songs that will take you back to the glory of the 80s.”
– 8 Bit Central – Retro Gaming Blog (Aug 31, 2020)

“Old school sounds mixed with a modern attitude… A band who are energetic, anchored to the past but stepping forward through a digital age. They are something to get excited about – Hats off to Fire Tiger for not only releasing an album of this quality, but for doing so in a time when the world is engrossed in a pandemic.”
– Kevin Burke, The Big Takeover (Jul 16, 2020)

All the Time Album Preview (12 songs in 2 minutes)