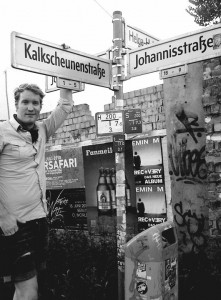 Mark Garfield is the founder and co director of Pop-Up Music, a global music library/publisher that provides music for Film, TV and Advertising industry based in London.

Pop-Up Music’s has gained clients television giants BSKYB, BBC and Channel 4 in the UK as well as strong connections with London/worldwide advertising agencies including McCann Erickson and Saatchi and Saatchi and also music supervisors.

As a professional musician Mark has toured and recorded as a drummer for twenty years, playing internationally. In 2011 gaining a BMus degree in drums. Music production has been a constant since making tea as a teenager at his fathers studio helping out on sessions by The Troggs, Thin Lizzys Brain Robertson to name a few  – plus later on co-producing with Eddie Kramer (producer Jimmy Hendrix, Led Zeppelin, Rolling Stones). As a writer he has written with Cream’s lyricist Pete Brown and has songs and interviews (along side Eric Clapton, Ginger Baker and Martin Scorsese) in the up-coming 2015 bio documentary about Petes life in poetry and music.