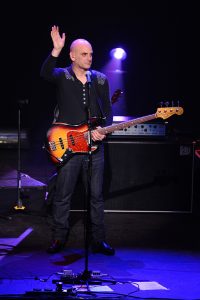 Guy Erez contains multitudes of music. Not only is he a hit songwriter, he’s also a renowned producer, a virtuoso bassist presently touring as a member of The Alan Parsons Project, and a celebrated film and TV composer.

An Israeli native who came to America to study music at Hollywood’s Musician’s Institute, he remained in Los Angeles after graduation to teach bass at the L.A. Music Academy in Pasadena and launch his career. When the artist Goldo invited him to co-produce his new project, Guy accepted and immersed himself in the new world of Pro-Tools, quickly becoming an expert, and produced Goldo’s album with the flair and finesse of someone who had been producing for decades. One song they created together as a joke, “Boom Da Boom,” which contains the infectious spirit of musicians making music for the sake of music, became an unexpected hit, and was first featured by Disney on their “House of Mouse” show and then in frequent rotation on radio Disney. At the same time, Fox TV picked it up as the theme song and used it to introduce their Tuesday night programming: “The Simpsons,” “King of the Hill,” and “Futurama.”

That early success became but one link in a long chain of successes. He signed a publishing deal with Chrysalis Music, and began writing songs for and with many artists and bands, including Jennifer Love Hewitt, who recorded not one but four of his songs, including the hit single “BareNaked.” When MTV needed theme songs and other music for both The Tom Green Show and The Andy Dick Show, Guy provided them. He teamed up with songwriters in need of his spark, such as Holly Palmer, Sarah Bettens (from K’s Choice) and Meredith Brooks. He swiftly became known as a guy people could turn to at the last minute to solve musical problems, such as when the Gipsy Kings needed someone to compile and produce a live album for concert tapes. In a mere three weeks, he created the dynamic The Gipsy Kings Live In London.

Presently he’s taken on a wealth of projects as a songwriter, producer and bassist, each reflecting the unique diversity that is his signature. He wrote and produced the theme song for Marvel/Disney’s brand new animated show the Avengers: Earth’s Mightiest Heroes, which will be broadcast in more than 100 countries. He produced and co-wrote songs for Manda Mosher’s acclaimed debut album Everything You Need, for Ryan Cabrera’s You Stand Watching album, and for Randy Coleman, produced “Hey God,” which was featured on the soundtrack of the Oscar-winning film Crash.

And as if that weren’t enough for many people to do in one lifetime, he’s also become the new bassist for The Alan Parsons Project, with whom he’s toured around the world, with recent concerts throughout America as well as Paris, Prague, Moscow, St. Petersburg, and Tel Aviv. It’s but one of many dreams come true for Guy Erez, who is living his dream, a life in music. – Paul Zollo