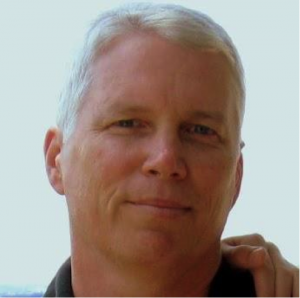 Tiring of all those who asked, “So how do you plan to earn a living?” he decided a backup skill was needed.

He joined the US Navy and trained to be an Aviation Electronics Technician, a skill he was to fall back on many times. “Electronics generated an income,” says Huffman, “while I pursued my passion.”

Procter & Gamble lured Mark to Cincinnati in 1984 (“Actually to hire my wife,” admits Huffman), and made him Executive Producer of their in-house production company. After 12 years he moved to an in-house production consulting role, and is now Executive Production Manager for Global P&G Olympics as well as North American Fabric Care (Tide, Downy, etc.) and Batteries businesses.

Mark changed his status in 1982 from “solo” to “duet” (married a musician), and over the years they grew to be a “quintet.” All children are now fully functioning adults, though none of them is pursuing music as a career. So the family is back to a “duet” plus the dog (who can’t play a lick).

He and Chuck Swanson (guitar) comprise Desafinado, offering an eclectic mix of Bossa Nova, Great American Songbook, Classical, Jazz, and 60’s pop in the Cincinnati area. CDs will be for sale in the lobby.