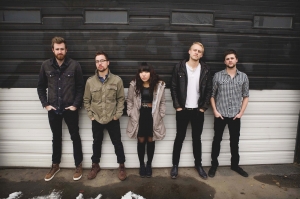 A former middle school choir teacher in a suburb of Aurora, Colorado, Hong used to write songs during her lunch breaks and play them for her students. She would eventually realize her passion was in creating and performing and left the public teaching field behind.  Beeble, a longtime friend, joined the project after several song-writing and recording sessions and a mutually found musical vision.

With formal musical training in multiple genres under both of their belts, Hong and Beeble released the acoustic EP, “Entropy” in 2013 to positive reviews, leading to a featured song (Pretend) on VH1’s Couples Therapy, a spot in The Denver Post’s Underground Music Showcase, as well as opening slots for acclaimed national acts such as San Fermin, Son Lux, and Caroline Smith.  “Entropy” would preface their next recording project, a series of three EPs, based on the songs introduced in their debut.

The first of the three EPs, “Equilateral”, expands upon Hong’s tendency toward ethereal and dynamic melodic vocal lines.  Hong’s ability to translate personal experiences (like heartache, death or exploration of faith) into relatable musical stories is even further accomplished with the help of Beeble in their full band arrangements.  “Equilateral” is complete with lush strings, harmonic layers, and pulsing drumbeats, interwoven between the piano and vocal lines that give Ivory Circle their trademark sound.

Ivory Circle creates a sound as unique as it is precise, electrifying and passionate.  The combination of their intricate compositions juxtaposed with Hong’s vocal prowess make them comparable to notable musicians such as Florence+the Machine, Regina Spektor, and Kimbra.  “Equilateral” is available on iTunes and Bandcamp.