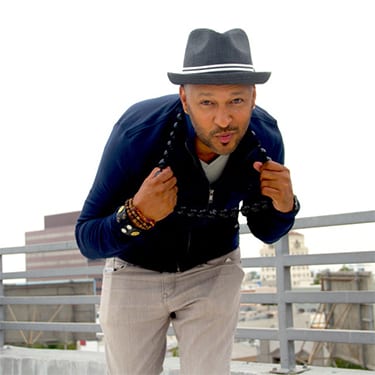 Jalen James Acosta is an American actor, record producer, filmmaker, inventor, entrepreneur, and philanthropist of Dominican descent. Born in Queens, New York. He was raised between the Dominican Republic and Miami while educated in ‘the school of Hard Knocks’.

A man who has found answers by making tracks. Both physical footsteps and musical ones, he has trekked down many roads and gathered experience along the way. In the field of acting, he has performed in many plays including an Off-Broadway production of Fame that was shortly followed by the 1999 BBC film Navy In Action. In 1999, Jalen’s first major music break came when he was invited to perform on stage with Enrique Iglesias. Remix features followed with Latin superstar Thalia, multi-platinum Mexican group Guardianes Del Amor, and legendary Celia Cruz’s remix of “Carnaval”.

In 2001, Jalen lost everything and ended up living homeless in the streets of Miami. While sleeping on a park bench, someone handed him a book that would forever change his life. After an epiphany Mr. Acosta renewed his wonder to “learn how to learn” which cultivated a transformation of himself. After calling an “actor needed” advertisement, Jalen was chosen from thousands of actors to host and perform Will Smith’s “Welcome to Miami” song. This included also hosting the world launch of Microsoft’s Windows XP and the unveil of the XBOX at the company’s keynote, all this at in the American Airlines Arena, the home of the Miami Heat, just one block away from where had been sleeping on a park bench while homeless. More than 21,000 Microsoft employees, media, and founders of the company enjoyed Jalen’s performance. He received praise from lots of people that day but only one memory stands out to him; getting to meet and speak with Mr. Bill Gates. Incidentally, two weeks later that same agency called him and he found himself working on the set of Michael Mann’s feature film ALI. Jalen worked as a standing for Will Smith, Jamie Foxx, Mario Van Peebles, and Jeffrey Wright. He has starred in national commercials campaigns for the likes of Bud Light, Burger King, and over 50 other spots.

Shortly after he founded Wize Foolz Music, a music production company. For about a decade, Acosta traveled across Europe with his band, a Dominican-inspired fusion of Bachata/Rock/Hip Hop: Toke D Keda (aka Toque D Keda). From clubs to stadiums across Asia, Europe, the Americas, and even down under, people have enjoyed Jalen’s music and packed their concerts. By 2005, Jalen bought his recording studio which allowed him to follow his long awaited dream of becoming a full-time music producer.

Jalen went on to be recognized and is credited with pioneering and implementing Hip Hop production & rapping into the Bachata genre as a member, songwriter and co-producer of his internationally famed Latin group Toke D Keda. The band went on to be voted to Latin People Magazine’s 50 most beautiful people, sold millions of records & performed in 10 World Tours.

Mr. Acosta has had multiple credited roles on TV shows including on hot tv shows like Burn Notice as well as made his Hollywood debut on David Rodriguez’s 2005 film, Push, along with Chazz Palminteri and Michael Rappaport. Acosta also went on to be heavily involved in technology and founded myfirstsingle.com, a social networking platform for musicians that launched in July 2009 and went on to have 5 million viewers in its first month, after a short stint during the financial meltdown, Jalen pivoted and co founded an equity crowdfunding tech company currently in beta. A feature spread featured on Hip Hop Weekly, details Jalen’s technological intuition in which he predicted the likes of companies like Soundcloud, Reverb, and others that would spring up years after the article was published.

Acosta is the founder and CEO of World Artists United. He also founded and co-founded several tech companies including myfirstsingle.com, FANTANK & 555 technologies LLC. Discovered and encouraged in his career by Superstar Enrique Iglesias & Laz Alonso, Odell Beckham & Dwyane Wade among others. As an artist or actor, he has appeared in over 50 advertising campaigns and major commercials for Fortune 500 companies such as Bud Light, Burger King, Sour Skittles, Nissan & Coca Cola among other notables. WAU is a full-service multimedia and entertainment company & has worked with Odell Beckham Jr, Dwyane Wade, Laz Alonso, Magic Juan & brands like SONY, Remy Martin, “Wade’s World Foundation” & PropPops, BeeFree Media for clients like Avicii, Fat Joe & many more. WAU has been instrumental to the growth of many brands, athletes & artists. Mr. Acosta works tirelessly with several non-profit organizations, he is passionate about the fight to eradicate illnesses and promote equal opportunities for education. He helped establish the Film Institute for URGENT inc’s City of Miami’s Summer program with the CRA, which empowers inner city youth interns to learn, grow and get prepared for future jobs within the film Miami industry. In 2018, Acosta and his partners along with Harvard Graduate Council launched the Music Entrepreneur Conference, which is now featured on FORBES and has become one of the most important conferences in the music industry, now expanding to China, New York, Japan and Costa Rica and with seminars and talks in more than 20 countries in 2019. Acosta is also the Co-Founder of City of Coachella’s Pura Vida, a Film Arts & Music Festival which will debut 2020.