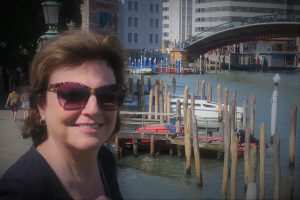 From jazz to electronica, from introspective piano solos to atmospheric production cues, JanetB’s music  encompasses a wide range of styles and emotions. A classically-trained pianist from a young age, she also  absorbed the popular music genres of her youth – Top 40, rock, singer-songwriter and Motown. While earning  her B.A. degree in Music & Theatre from the Aaron Copland School of Music (Queens College) in New York  City, she fell in love with jazz and show tunes as she learned the theory and craft of making music.

JanetB returned to her musical roots in 2016 after a successful corporate and entrepreneurial career and began producing her original compositions. She earned her first music placement in October of that year with  two of her tracks, “Deadly” and “Lisa’s Smile”, being chosen for airplay on “Jukebox Podcast”, an online showcase for indie musicians. She has had continued success in 2020 with the licensing of her track  “Smartypantz” as the opening theme for the new “Elevate Your Music” podcast series hosted by music  supervisor Linnette Harrigan of LH Media Group. You can also hear several of her tracks on the Internet radio  station Outbound Music. Munchkin Studios in California has recently signed two of JanetB’s piano solos in  their collection of music licensed by retailers for in-store broadcast. Advantage Consulting also licensed one of  her tracks, “Time To Rise”, to be used in a promotional video for new clients.

JanetB collaborates with a number of artists and producers in the U.S. and abroad on various projects intended for music licensing. She is also a co-organizer of the Women+ Music Producers group which is dedicated to helping female musicians become knowledgeable and confident music producers. She regularly presents mini-workshops on music theory and music business topics for the group’s events.

Her original music can be found on her website www.janetbmusic.com, and on all the major streaming platforms including Spotify, iTunes, and Pandora.