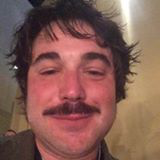 Jeff’s first foray in to the music business at 18 years old was getting paid $20 cash and a Neil Young concert VHS tape as compensation to play guitar on someone’s demo tape. This is still some of the most money he’s ever been paid for playing music.