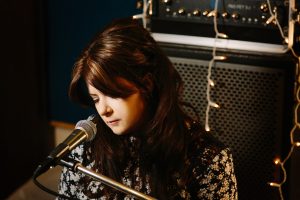 Between singing at London’s prestigious Royal Albert Hall as a child to her time working alongside legendary producer Stuart Epps (Elton John, Led Zeppelin), it should come as no surprise that music has become a driving force in the life of Julie Ludgate. The pop artist, songwriter, and composer was a finalist in the 2016 National Songwriting Competition, an achievement that landed Julie on an eight-week run season of Tin Pan Alley on Showbiz TV. Her music inspirations include the likes of Celine Dion, Sarah McLachlan, Kelly Clarkson, Pink, Sia, and Heart. She has also won a number of songwriting awards including an ISSA award for “Female Songwriter of the Year 2020”.

Away from music, Julie enjoys spending time with her family, friends, and her Golden Labrador, Casper. She is a big fan of television shows like This Is Us, Friends, 24, Vampire Diaries and Pretty Little Liars as well as movies like The Game, Legends of the Fall, and Philadelphia. She currently resides in the southern England town of Basingstoke.