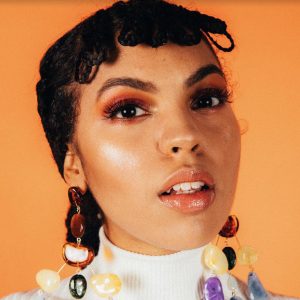 Chicago native KI (Kiara Lanier) is a vocal performance artist, songwriter and actress. Kiara Lanier’s music is a sensual yet ethereal blend of R&B, Future Soul, and World music. She is equally derived of the lush acoustic soul of the 70s and electric hues of contemporary music using 808s, synths and field sampling. She has been compared as the cosmic essences of a modern Chaka Kahn, Sade, and Lauryn Hill.

Kiara’s voice has been featured on television shows to include American Idol, David Bowie’s Station to Station Film, The Tonight Show, Empire and The Chi. She also sync licenses her music on numerous networks including Showtime.

Kiara is no stranger to large stages; having performance credits to include Presidential parties, Lollapallooza, and various festivals across the US and Europe. Her breakout EP Tongues and Teaspoons debut with a premier of her beloved single Friendzone on Okay Player. Kiara is currently based in Los Angeles, CA.