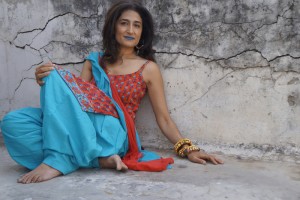 At the centre of Kiran Ahluwalia’s music is love in all its shades, from the yearning romantic to the divine love of Sufi Mysticism.

She is a modern exponent of the great vocal traditions of India and Pakistan which she honours intensely yet departs from in masterful, personal ways. Her original compositions embody the essence of Indian music while embracing influences from both the West and Africa — specifically the Sahara. With her 5-piece group of electric and acoustic guitar, harmonium, tabla and electric bass, Ahluwalia creates boundary-breaking songs that invite us to explore the human condition, transcending the self by losing ourselves in love.

Born in India, raised in Canada and currently living in New York City – Ahluwalia’s last CD, Aam Zameen: Common Ground was awarded her second JUNO Award. Her discography, now six albums deep, is one of global music’s most interesting adventures. Her new album, Sanata : Stillness (released in Canada/USA in October 2014 and worldwide in March 2015) is a hybrid of Indo-Saharan music.

In Kiran’s words, “When you take two styles and merge them together and you don’t want a simple cut and paste then you’re really developing a new hybrid genre. You’re doing something with no clear blueprints to help you. For me it’s important to blur the musical boundaries between my Indian background, influences from Western sounds and the things I love from the Sahara. It’s incredibly invigorating when I feel a connection in expressions from different cultures and then figure out ways to connect them seamlessly in my music. Those moments of discovery are nothing short of sublime. It’s really the essence of everything for me.”

Her ease of manner on stage makes her a unique and inspiring performer whose legion of fans continues to grow with every captivating performance. Kiran has toured regularly in North America and Europe and has performed at desert festivals in Mali, Morocco and India. Her music has garnered glowing praise from critics around the world. “Ahluwalia is busy honing a transnational sound as fresh as tomorrow” (Seattle Times) and “Hers is a voice destined to enchant more than one generation” (fRoots, UK).

Kiran has long been on a path to master the art of singing and composing. “When I was growing up in India”, she recalls, “there were concerts that people from all over would crowd into. These concerts featured a repertoire, language and content that was both demanding and beyond the experience of a child. I was, however, entranced by the sound and feel of the music, even from an early age.” Seeing the strong connection Kiran had to this music, her father purchased a reel‐to‐reel tape machine on a visit to Hong Kong. “My father would play tapes of Indian music for me on the reel‐to‐reel and we would also listen to Bollywood on the radio”, Kiran recalls. “So when a song came on that I wanted to learn, my mother would quickly write down the lyrics for me and I would sing along to learn the melody”.

From the time she was seven, Kiran immersed herself in Indian classical music and ghazal, a song form based on Urdu poetry. When the family immigrated to Canada she continued her musical training alongside her regular school. After graduating from University of Toronto in the early 1990s, she returned to India where she spent a decade of intense deep study with her classical guru Padma Talwalkar and her ghazal guru Vithal Rao. At the same time, she travelled throughout the Punjab, immersing herself in the style and approach of Punjabi folk songs. Finally in 2001, back at home in Toronto, she recorded her first commercial CD, Kashish‐Attraction. This was followed by the JUNO-winning Beyond Boundaries in 2003 and then a self‐titled compilation that was released worldwide in 2005.

Before composing for her 4th album, Kiran met her musical and marital partner Rez Abbasi. A New York City jazz guitarist with a Pakistani-American background, Rez’s accolades include No. 1 Rising Star Guitarist on Downbeat magazine’s International Critic’s Poll. His arrangements and ideas played a crucial role in influencing Kiran to compose and present in a more modern sensibility. Together they travelled to Portugal to collaborate with fado musicians for Kiran’s 5th recording Wanderlust – winner of the 2009 Songlines/WOMAD Best Newcomer Award in the UK.

Through a chance encounter with the legendary Malian group Tinariwen, Kiran became fascinated by the guitar-driven approach of Tuareg music of the Sahara desert. After intensely studying Tuareg and other West African music she was convinced she needed to own the addictive, hypnotic and cyclic rhythms in her own compositional ideas. In 2011 she released her second JUNO winning album Aam Zameen : Common Ground. Recorded in Paris and Toronto, it featured her Saharan friends, Tinariwen.

Her latest recording Sanata : Stillness is a synthesis of Indian, western jazz and Saharan sounds – all of which she brings into a style uniquely her own. Writing both the words and music for her newest release, Kiran’s songs speak about: the unattainable, both the beloved and the divine, realizing female desire by throwing away all shame, and untying the knots that bind us to stale embraces. Her compositions and arrangements are a reflection of an ongoing quest to create timeless music in a modern and global context that looks to the future while still maintaining a vital line to its storied past.