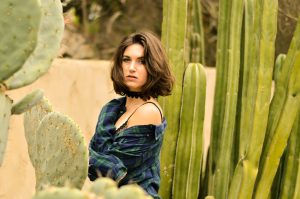 LeahCapelle is a stunningly, talented Singer-Songwriter from Chicago. Her brand of pop rock will stop you in your tracks, and she has certainly amplified her sound in her upcoming EP Joshua. Capelle has been performing and studying music from a young age. She attended the Berklee College of Music in Boston before moving to the West Coast to pursue music full-time. At that time, she partnered with Grammy winning producer Jeff Bova (Celine Dion, Meatloaf, Blondie) to release her self-titled debut EP, Leah Capelle in ’15. Capelle found a group of immensely talented musicians to form her band and they are actively performing in Los Angeles.

Capelle says about the making of “Joshua” EP: “This new album has been such a journey. We went into the studio last spring with the intent to record an EP. Throughout the year, as we developed and grew with the songs, I also continued to write. So I’m extremely excited to announce that I’m going back into the studio to record four brand new songs this spring, and will release my first full length record by the end of the year! My self-titled EP Leah Capelle was released in the spring of 2015, and is a very beautiful and personal record for me. That first EP was a blend of folk and contemporary, while this new project is a bit more modern, more electric, and more streamlined alternative/pop/rock.”

This is her second EP working with Bova and shares her vulnerabilities through her narratives and discovering her new sound. Skope Magazine says: “Sometimes a little goes a long way. The latest release from Chicago based singer/songwriter Leah Capelle is a three song EP entitled Joshua. Despite the apparent brevity of such a collection, Capelle encompasses vast musically imaginative worlds in this trio of songs thanks to two crucial factors above all others – the songwriting talent involved and, naturally, her vocal quality. Some have described her as a young Stevie Nicks and, while the comparison is naturally flattering, Capelle has a far more consistent bluesy gravitas coloring her singing and a signature style of tackling a song’s various components. Though she has technique to burn thanks to a stellar musical education and background, Capelle doesn’t sing like a technician. She has a freshness and spontaneity, instead, capable of capturing the spirit of any song with skill and grace. Leah Capelle is a rare talent and Joshua vividly illustrates why.”

Award winning cinematographer Jesse Davey created a fantastic music video of “Joshua” which was written after a need to escape the thralls of LA by taking a camping trip to one of the coolest places on the planet, Joshua Tree. It’s about freedom, friendship and letting go.

Capelle’s follow-up single “Out Now” released globally January 23.  In this song about the classic love triangle, Leah explores her relationship with her male best friend, and encourages him to pursue another, then ultimately realizes that she would rather have him for her own.  For the folllow-up video, Matthew Phelan produced, while Robyn August directed and edited “Out Now” which dropped globally on March 31st.

You can take a look here:

“Who I Am” was just released March 24th. This pop rock song was a co-write with songwriter phenom Pam Sheyne (Genie In A Bottle) and Jeff Bova.  Indie Music Reviews says: ““Who I Am” concludes the EP on a stirring peak. The rock and roll power harnessed by her accompanying musicians gives this song a unique flavor compared to the first two tracks and it’s a welcome change of pace. Once again, Capelle and her band distinguish themselves in a big way thanks to their restraint – this could easily descend into posing and cheap pandering, but Capelle and the players keep everything above board and never make a mockery of the song’s emotional bent. It follows much of the same trajectory heard in earlier songs, but the different texture makes an enormous difference and the chorus is, arguably, the EP’s punchiest.”

You can listen to Who I Am right here.

Leah establishes a direct link with her fans.  In Capelle’s own words: “I want people who listen to my music to feel like they know me. I lay everything out on the table – I don’t ever write music that doesn’t relate to either what I’m going through or what my loved ones experience – so I deeply want to develop closeness with my fans.” Vents Magazine says: “Capelle has a well-honed sense for getting to the heart of what a particular performance demands with no nonsense style aiming to realize the composition’s potential. It’s a potent approach and pays off with a real winner of a release.”