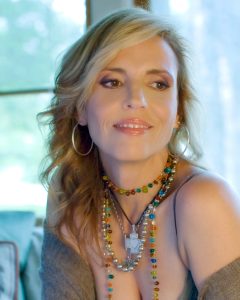 Leslie then moved to CA where she became a jingle singer and A-team studio singer, working with Walter Afanasieff at SONY Music and Mark Keller and Jeffery Cohen at Boomtown. She won her Grammy® as a featured vocalist with Celine Dion on “My Heart will Go On.” She was also a featured vocalist with Thomas Dolby on his recent CD, “Forty” and sang BGVs on many records.

In the world of Sync Leslie sang the closing credits song “Six Times Around the Sun” in the CBS mini-series, “Perfect Murder, Perfect Town.” She has also had placements of her original songs in independent films.

As a songwriter her “Flyer Song” was adopted by the US Navy in a video tribute to the troops and their families; She’s had numerous cuts including 2 Top10 Hits on Americana Radio in the UK/Ireland.

She performs live across the USA and Europe with twice Grammy® nominated #1 hit songwriter husband Casey Kelly in the duo Kelly&Ellis. Their debut album “The Long Road to You” won 2018 IMEA A/C Album of the Year. “Tennessee Whiskey” off the same album, was a Top 10 Hit on European Americana Radio for 8 weeks, resting at #4.