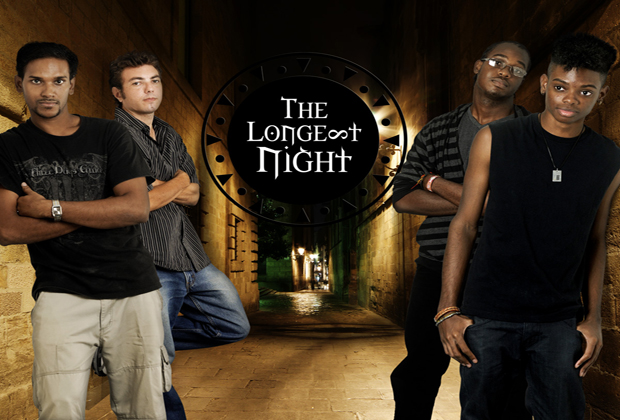 In the Spring of 2011, three music students from the Barbados Community College decided to join forces to take the Alternative Rock world by storm. Add one fiery guitarist and the result is The Longest Night or TLN!

The four-man group is the latest musical happening out of the island of Barbados. Led by Robbi Sélin, a rising singer/songwriter and guitarist, this group is busy at work producing phenomenal music. Alongside Robbi there’s Evil Will providing wicked riffs on the electric guitar, Jahz and his talking bass and heavy hitting Bobby Havoc on the drums.

TLN’s first releases – Keep With Me and Fall – have received great reviews from their ever growing fan base and the group has no intentions of resting on its laurels. To ensure that they keep their fans happy, they have just completed their debut album entitled “State of Attention” with ace producer Fabian “Minim” Worrell at ZuriShanaje Studio in Barbados.

Check out their song “Keep With Me:”

And look out for their new releases in 2014-2015. The music is guaranteed to blow you away!