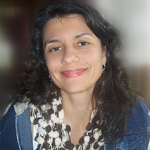 Luciana graduated in Social Communications at University of the State of Rio de Janeiro, majoring in Cultural Marketing at Cândido Mendes University and receiving her MBA in Marketing at IBMEC Business School.

Luciana participated in the planning and production of numerous international events, including national tours and open-air concerts to audiences of over 100,000 people for three years during her work at Dell’arte Artistic Productions in Rio de Janeiro.

At Warner Music Brazil, Luciana worked for seven years promoting, launching and disseminating classical, jazz and blues repertoire as well as the marketing of Brazilian artists abroad, managing special projects and the production and launch of the Warner Music Brazil’s first DVDs.

At Warner Music, Luciana personally hosted and promoted artists that include: tenors Jose Carreras and Placido Domingo, singers Kiri Te Kanawa and Jessye Norman, the violinist Maxim Vengerov, the vocal group Take 6, guitarists Pat Metheny and Mike Stern, fado singer Misia, among many others. She also worked on international tours with the Brazilian artists Milton Nascimento, Gilberto Gil and Fafa de Belem. Before 2003, when she founded the label Delira Musica,

Luciana worked as a flutist, having performed and recorded alongside names such as Toninho Horta, Yuri Popoff, Nelson Faria, Vittor Santos, among others. Delira Musica started as a label specialized in classical-jazz-instrumental repertoires, with the aim of promoting high artistic standards of music and attending a public avid for consistent new releases, promoting quality music selected from the independent music scene. From an initial catalog of 16 titles, the company dedicated itself to developing the niche of instrumental music, gaining national recognition as a brand that imprints a seal of quality on its releases.

The label Delira Musica has an extensive catalogue of albums and contents that unites important works of many leading musicians, arrangers and Brazilian authors. The label performs advisory work on the record business and career development for musicians and artists from all over Brazil. Alongside with her work for Delira Musica, Luciana dedicates some of her time to develop the digital market in Brazil. In 2010 she was elected president of ABMI (Brazilian Independent Music Association) and is currently ABMI’s Managing Director.

She has led a full and thorough restructuring of the organization. She solved the organization’s deficit issues and increased its revenue by 364% in two years. Also, she has organized discussions, participated in every major industry forums and resumed action for the approval of PEC Da Música, passing the proposed amendment to the Brazilian constitution in two parts in the Chamber of Deputies and the Senate’s Commission of Constitution and Justice.

Also, she has participated in all major industry trade fairs in Brazil and abroad. Luciana has promoted the transparency ABMI’s accountancy. She has brought important companies to be members of the ABMI, forging relationships with important entities and companies like ABPD, Som Livre, Roland, Editora Espetáculo, Festa da Música, Midem, Womex, CMW, Merlin, WIN, Sebrae and BNDES, and raised funds for the causes of the sector. Most recently, the has organized and produced the “ABMI Seminar Digital & Sync” that brought together prominent national and international music industry professionals for 3 days of panels, discussions and meetings in Rio de Janeiro.

Luciana has extensively promoted ABMI to the media, creating a vital position for the organization on every significant music agenda. She is also currently a board member of Merlin (a global rights agency representing the world’s most important set of independent music rights). The board of directors is elected for two years and is composed by representatives of the music industry from all over the world. Luciana is the only Latin-American representative and is contributing a Brazilian perspective of the new music industry. Luciana participates at the WIN meetings and discussions as an ABMI representative.