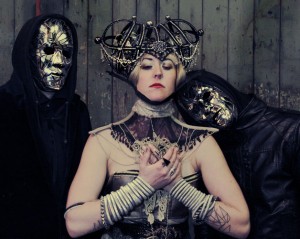 What do you get when you combine a visionary activist, a metal, IDM & psychedelics- fuelled drummer with an obsessive-compulsive musician? Lunar & the Deception combine ethereal, hypnotic melodies with the guts, backbone & raw talent to back up their conviction.

Whilst their heaven & hell sound is reminiscent of My Bloody Valentine, Black Tambourine & Fever Ray this outfit refuse to gaze at the floor. Lead singer & synth player Britt Foe is an acclaimed artist, fashion designer & writer, notorious for her high fashion theatrics. Music has always been the passion she held closest to her heart & like a spectral butterfly she has emerged with intense splendour, fully formed & beautiful.

Lunar & the Deception are currently recording their debut album @ Old Street Studios with their producer Jerry Kandiah (The Young Knives, The Futureheads, Killing Joke). The debut single ‘Breathe’ is a haunting, catchy pop anthem, with a faintly sinister edge, it digs its claws into you, gets under your skin. They create a sound riding on waves merged between polarities – melancholy & joy combine to give birth to a gorgeous, memorable tune which like all good pop songs works on many levels at the same time.

Hedge Seel’s drumming style is distinctive and unusual. Inspired by break-beat and world music, he integrates tribal rhythms and improvised broken beats that give great dynamics to the track. Since working as a music journalist for a well-known broadsheet, Seel’s focus has been on composing music that combines his passion for rave, thrash metal and psychedelia in the band TRIBAZIK. Having heard Lunar & The Deception demos, Hedge jumped at the chance to work with a project that is disciplined, haunting, contemporary & accessible. He continues to work as a session drummer & percussionist from Old St Studios, North London.