Mariela Arredondo – Co-Founder, What Up Pitches 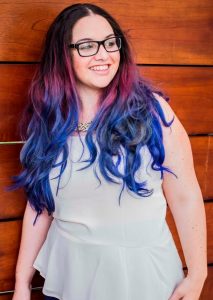 Los Angeles based singer/songwriter, Mariela Arredondo has been honing her skills as a musician since a very young age. Born and raised in Costa Rica, she grew up listening to a mix of Latin Music, Pop and Rock en Español but moved to LA to study Jazz, R&B and Soul at Los Angeles College of Music. All of those years of experience, loving all kinds of music, have melted into interesting influences in her songwriting.

She has toured around the world as Nova Mariéé, currently works as a lead singer for several bands in LA, a private vocal coach, a session singer for renowned musicians/producers such as John Avila (Oingo Boingo) and Grammy-Winner Stanley Clarke (his song “Last Train To Sanity”, featuring Mariela, was nominated for a Grammy), and as a sync writer. Her passion for creating and singing her music has earned her placements on Ads, TV, and Film worldwide. Obsessed with her blue hair!