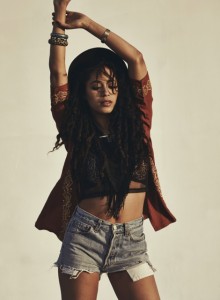 The daughter of a West African mother and a Jewish father (Gary Strauss, a former guitar player who played with Sylvester, Carl Carlton, and Jimmy Ruffin),[2] Mayaeni did a hip-hop dancing stint in London[3] and started by recording demos for other artists at 17, followed by a well-received self-titled album with producer Shaun Fisher. While touring in Japan in 2007, Glad News Clothing, a popular label in Japan, New York and Los Angeles, signed her to an endorsement contract.

In 2010 Mayaeni was featured in the Target/Converse “One Star” ad campaign as well as in the National Association of Broadcasters“Radio Heard Here” campaign.[2] A demo of her track “The Right Way” went to #7 on the FMQB radio play chart in the US. She performed with the Don Was Detroit All Star Revue at the legendary producer’s’Concert of Colors in Detroit in July,[3] and in November her song “Moonlight” was featured on the prime-time ABC TV show Detroit 1-8-7.[5] Her song “Bee” (co-written with Boots Ottestad and Rosie Golan) was selected as one of the options for the Eurovision 2010 Song Festival and became a single and album track for German Eurovision winner Lena Meyer-Landrut (the fifth biggest selling album in Germany in 2010). “Bee” charted in Germany (#3), Austria, and Switzerland.

In May 2011 Mayaeni completed Cold Love, an acoustic self-produced 6-track EP with guitarist Steve Caldwell. An industry-only showcase in London resulted in her signing a worldwide publishing deal with Sony/ATV in August 2011.

Her song “Nothing Inside” with DJ Sander Van Doorn (co-written with Justin Parker of Lana del Rey‘s “Video Games” fame) hit #1 on Cool Cuts, the DMC Buzz Chart, and the Beatport Overall Chart in June 2012. Performed for the first time at Ultra in Miami in March in front of over 25,000 people, “Nothing Inside” has become a breakout summer 2012 hit in numerous countries, including the NetherlandsTop 40. BBC Radio 2 added “Nothing Inside” to its playlist in June.

Mayaeni signed with Roc Nation in September 2012 and is at work on her first major label album.