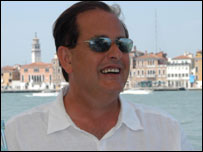 Martyn was born in 1956 in Sheffield, UK. After leaving school he worked in computers for 3 years, and in 1978 formed The Human League. He formed the production company/label British Electric Foundation in 1980 and formed Heaven 17 the same year.

He founded Illustrious Company with Vince Clarke in 2001 to exploit the creative and commercial possibilities of their unique three-dimensional sound technology, in collaboration with fine artists, the performing arts and corporate clients around the world. Clients include: BP, the British Council, The Science Museum, The Royal Ballet, Amnesty International, the V&A Museum, Mute Records, BBC TV, the Royal Observatory Greenwich, BAFTA, Museum Of London, Tate Britain. He created sonic architectural works in the British Pavilion at the Venice Architectural Biennale in 2006.

Martyn produces and presents an ongoing series of events entitled Future Of Sound in the UK and around the world.

Martyn is a Visiting Professor at C4DM at Queen Mary College, University of London, a visiting lecturer at the Royal College of Art and the Harvard Graduate School of Design, a patron of Arts & Business, a member of the LA-based international think-tank group Matter, a Fellow of the Royal Society for the Arts, a member of the Writers Guild of America and a founder member of 5D (a US based organisation promoting all aspects of immersive design). He also lectures extensively on music production, technology and creativity at universities and colleges across the world including the Red Bull Music Academy.

He is creative director for the world-leading sound-branding agency, Sonic-ID.