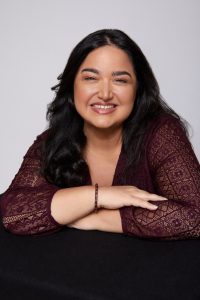 Nicole Sanzio is a music industry authority in media licensing, rights and clearances. As the owner of InDigi Music — and its parent company, Multi Music & Media Group, LLC — Nicole has independently placed various styles of music and compositions in film, network television, and other multi-media platforms. Her unique accomplishments within the corporate world of media licensing, combined with her success as a business owner, has made her a sought-after expert within the fast-changing industries of licensing / publishing, royalties and copyright.

Nicole’s career began in college when she was recruited to work with music publishing giant, EMI Music Publishing. Upon graduation from Montclair State University, she accepted a position with BMI (Broadcast Music, Inc.) as a Royalty Administrator and Media Licensing Assistant. Her knowledge of royalty distribution amongst writers and publishers and her natural ability would pave the way for a move to VH1, where Nicole was hired as Rights & Clearances Coordinator. She would soon be promoted to Senior Coordinator within the Music & Media Licensing Department at MTV Networks, where she specialized in protecting the rights and interests of writers, publishers and other copyright owners of third-party materials within MTV properties such as the Video Music Awards, MTV Movie Awards, Super Bowl Halftime Show, TRL, Direct Effect and many more. While at MTV, Nicole took a gamble on her knowledge and brokered the licensing of music from independent writers, composers and producers to the network; it paid off. Her placements were featured on a host of Viacom programming including the Video Music Awards, “Cribs”, “TRL”, “Pimp My Ride”, “Hottest MC’s in the Game”, “My Super Sweet 16”, VH1’s “Best Week Ever”, “MADE”, “Punk’d”, “My Life Translated”, “Discover and Download”, and more. In addition, she would land placements outside of the network on FOX’s Speed Channel “Unique Whips” and NBC’s Bravo Network “Millionaire Matchmaker”, to name a few.

Departing MTV with over a decade of experience and an in-depth knowledge of various types of media licensing, Nicole would go on to serve as a private consultant for Fuse, Showtime and Sony BMG Music Entertainment. Heeding the call to utilize her expertise and educate independent writers / composers / artists on music licensing for TV / Film, Sanzio would launch Multi Music & Media Group LLC in conjunction with her own Production Music Library and Music Licensing company – InDigi Music – in 2006.

Nicole Sanzio’s innovative thinking and inherent work ethic are paired perfectly with her passion for music. Through her company, Multi Music & Media Group LLC, she currently serves as a Rights & Clearances consultant. Some of her past and current clients include Combs Enterprises, Today Show (NBC), NBC Nightly News, MSNBC Meet the Press, Sony Music Ent., Smithsonian/Showtime Networks, Sundance Channel, and Viacom (MTV/Vh1). She has been featured in national publications and commissioned to guest lecture at a number of Universities including York College (Copyright & Music Publishing Law), Temple University (Entertainment Law) and Bergen Community College. Nicole enjoys educating writers and producers on licensing/publishing – often participating in panel discussions and judging producer / artist showcases. She has been a guest speaker at SXSW’s 2016 – 2021 Conferences on Music Supervisory panels and participates in SXSW’s Mentor platform as well. She also recently spoke on the Producer’s Networking panel at last year’s Queen’s Hip Hop Festival and this year’s A3C Hip Hop Music Festival. She is a much-needed voice of advocacy for talented (unsigned) independent writers and producers, and continues to assist various entertainment / media companies in obtaining the necessary rights for broadcasting elements such as Music, Photos, Footage, Talent and Print.