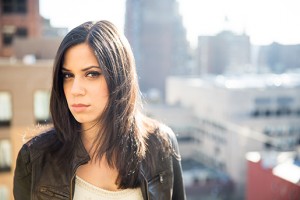 If Omnia Hegazy was not a musician, she might have been a journalist. The daughter of an Egyptian-Muslim father and an Italian-Catholic mother, she grew up in New York City a citizen of the world, with a passion for music and storytelling. Her sound is informed by guitar-driven American pop/rock, maqam-based Arabic folk, and the politically charged singer-songwriters of the past and present.

Omnia started singing around the age of five and became a dedicated classical violinist at the age of ten. Looking for more artistic freedom, she picked up the acoustic guitar and discovered songwriting as a medium of self-expression. Now twenty-four, she does not draw inspiration exclusively from her own experiences. Her diverse perspective has also prompted her to take on issues such as women’s rights and political freedom. After scribbling her observations in a notebook on her trip to Egypt in 2010, she wrote half of the material for her first EP Jailbird and released the project independently a year later. Her sophomore EP entitled Judgment Day was released in May of 2013 and met with major press, including features on The Huffington Post, Fox News, The Daily Beast, and pan-Arab newspaper Al Sharq Al Awsat.

Omnia is a graduate of the prestigious Clive Davis Institute of Recorded Music at New York University’s Tisch School of the Arts, where she studied music production and music business. She performs frequently at venues and universities in the United States, and is currently in the process of writing and recording her first full-length album.