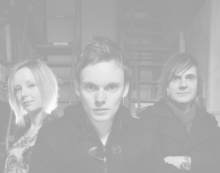 Outbox’s music has been described as “Magical Mystery Pop meets hit single…”.  For any aficionado of late Beatles albums, the former description will strike a chord, particularly on tracks from their debut album Millie’s Magical Catnip Dreams, which flirts with the description of a ‘concept album, but retains a 21st century feel in its style and delivery.

Michael has, to put it simply, a fantastic voice.  Utterly contemporary, but occasionally hinting at 80’s undertones (no pun intended), his distinctive vocals are backed by Rachel’s delicate harmonies, underpinned by top class instrumentation driven by Steve’s excellent drumming.

Conversely, their 2011 single “How To Fly” (which made the UK Top 100 and the Scottish Top 50) is simply a clever yet catchy, contemporary pop song, which had it been released by a major could easily have been ‘one of those songs’ that you listen to once and can’t get out of your head.

But it wasn’t!  And consequently it is one of 19 tracks composed by Macdermid/Wood/Curtis that is available and ‘ready to go’ into the world of sync licensing exclusively through Syrenne Sync Ltd.