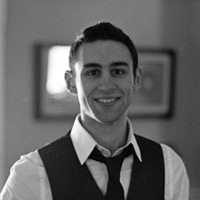 Utilizing PARMA’s unique capabilities in producing large-ensemble score, in conjunction with a focus on strategic audio branding, Jake has managed a wide spectrum of projects such as the production of a rebranded sports theme for CBS (which was recorded with a 65-player European orchestra, and premiered during the 2013 Super Bowl broadcast), music clearance and placement for the GMC/NFL “Never Say Never” web campaign, and most recently the creation of original score for the popular FX series, Archer.

In addition to PARMA’s supervision and custom audio work, Jake oversees the administration of the PARMA Licensing Catalog, which spans an array of musical styles and genres and has been placed in such settings as ABC, HBO, MTV, A&E, C-SPAN, Discovery Channel, Showtime, 20th Century Fox, Universal, Microsoft and more.