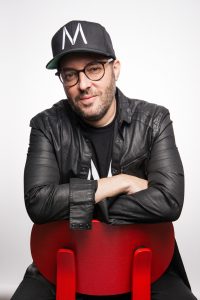 Paul Goldman is the CEO of Muserk, the pioneering digital rights management company which he founded in 2017 to identify digital content for rights holders with capabilities of scaling with speed and accuracy. In four years, Muserk has become a leader in modern global rights management for music, comedy, spoken word, and video, driven by cutting-edge AI technology solutions that protect and monetize content for rights holders around the world, across all media formats.

Goldman graduated from the prestigious Berklee College of Music in 1993 and began his career in New York City interning for some the top jingle writers of the day. Within a year, at the age of 24 he founded the award-winning company, Ear Goo Inc., focused on original music and sound design for television, film and media. Spanning over two decades Ear Goo has been linked to almost every industry award, including the Emmy, Clio, ADDY, Promax/BDA, New York Festival, Art Directors Club, Beacon, and Telly Award.

In 2017, when Goldman was asked about the royalties he had earned on thousands of musical works he had composed over the years for top television shows like The MTV Video Music Awards, he realized he wasn’t even aware that he was entitled to royalties. When he asked his local performing rights society (ASCAP) about these royalties, he learned there was no system for even tracking usage of these works and that potentially hundreds of thousands of dollars of his royalties were gone forever, uncollected and unaccounted for. Immediately, he knew he had to fix this problem and streamline the overly complex copyright royalty chain by leveraging custom, scalable technology solutions. Muserk and Blue Matter were born.

Muserk was conceived for every artist who was cheated out of their royalties, to hold tech companies like YouTube, Spotify and Apple Music accountable and make sure the royalty money makes it to its rightful owner. Currently, Muserk manages over 6 million copyrights from more than 50 countries in 98 territories. Their customers now make more money, in more places, and faster than ever before.