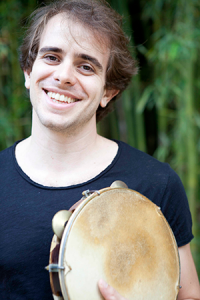 “Sergio Krakowski is a great musician” – this is how Gonzalo Rubalcaba defines the pandeiro player born on the 18th December 1979, who have dedicated his life since the age of 15 to this percussion instrument, the Brazilian Tambourine, which is considered the symbol of Brazilian Music. Crossing whatever national and cultural barrier, Sergio acted in various musical contexts from the Choro genre, the fundament of Brazilian Music, to Jazz and Contemporary Music.

Besides his musical career, Sergio is Bachelor in Mathematics, did a Master in Applied Mathematics and completed a PhD in Computer Music.

During these years Sergio dedicated his career to the group Tira Poeira. They recorded two albums released by the Biscoito Fino Label and shared the stage with artists such as Maria Bethânia, Lenine, Zélia Duncan, Olivia Hime, Francis Hime, Bnegão, Beth Carvalho, Hamilton de Holanda, and Nicolas Krassik. They appeared on several Brazilian TV shows such as Jô Soares, Altas Horas, and Sem Censura. They performed at events such as the “TIM Festival” and the “Projeto Pixinguinha”.

– Spent one year as invited researcher at the Sony/CSL laboratory in Paris during the development of his PhD thesis. – Formed the Terça-Feira Trio in Paris, with Ricardo Herz (violin) and Fernando Del Papa (Cavaco).
– Played at the Orsara Jazz Festival with Philipe Baden Powell, Natalino Netto and Cristina Renzetti.
2008

– Idealized the ChoroFunk project, a mixture between instrumental music and brazilian’s electronic genre called Funk Carioca. He recorded it at the Biscoito Fino Label. It has been well-received by the audience and the media (http://www.youtube.com/watch? v=7fMHv6cD0ck).

– Presented the ChoroFunk project in some of the most important stages of Rio de Janeiro such as Circo Voador, Pier Mauá, and Clube dos Democráticos receiving guests such as Chico César, Pedro Luis, Moyseis Marques, Carlos Malta, and Nicolas Krassik.

– Approved his research work in three categories of the most important Computer Graphic’s Conference, the SIGGRAPH’09, in New Orleans.

– Performed with Gonzalo Rubalcaba and David Linx at the “MIMO” Festival in Olinda, Brazil.

– Performed at the KVS theatre, in Belgium, in the project “Baldwin/Linx/Van Dormael”, directed by David Linx and Fabrizio Cassols, staring Aka Moon and several other artists.

– Played at the Lillabaren with Cristina Renzetti, and the swedish musicians Adam Forkelid and Nills Berg.

– Was a special guest on a concert featuring David Linx, Maria João, Mario Laginha and Diederick Wissels, at the “Parc Floral”, in Paris.

– Started the “Radial Sul” project. A series of jam sessions that happens in his place and are broadcasted live through the internet, starring several great brazilian young composers and musicians.

– Recorded as a guest artist in the “Rock My Boat” album featuring David Linx, André Ceccarelli, Roda Scott, Lenine and several other artists.

– Shared the stage with David Linx, André Ceccarelli and Roda Scott at the Sunside Club, in Paris.

– Toured Denmark, Sweden and Czec Republic with his own duo and with a trio featuring Cristina Renzetti and Stefano Debonis.

– Reedited the ChoroFunk project in Rio de Janeiro playing at the “Teatro Rival”, “Bar da Boa” and “Leviano Bar”. Had as special guests the singers Mario Brother and Pedro Moraes.

– Produced the first album of the singer and songwriter Paloma Espínola.

– Played in the Festival Rio Loco in Toulouse, with Vincent Segal and band.

– Performed as special guest in Tigran Hamasyan’s piano solo concert bowling over the audience of Sala São Paulo with their piano-pandeiro duo.

– Produced a series of Brazilian Contemporary Music concerts at the Midrash – Jewish Culture Center in Rio de Janeiro, in December.

– Played for the second time, in January, at APAP Brazilian Showcase at (Le) Poisson Rouge in NY now bringing his own trio from Brazil.

– Presented in Paris the sound installation “Regards en 3D”, a partnership between LAGA – Université Paris 13 and the IMPA.