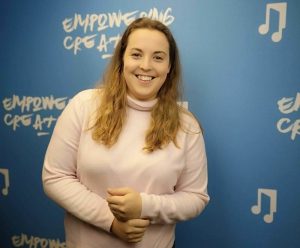 A dedicated member of the music industry with a passion for monetizing artists’ creativity through licensing.

Experienced in negotiating, clearing and closing deals across Film, TV, Trailers & Games including both individual licenses and bulk catalog deals.

Sophie join Music Gateway as an intern in 2014, her potential was quickly recognized and she was promoted through the ranks to Marketing Manager in 2015 and Head of Operations in 2016.

At just 23 Sophie led her first major nation-wide campaign from inception to fulfillment, managing Music Gateway’s lead team, in partnership with Gibson Brands and Argos & Metropolis to encourage the next generation to create music. The prize package for the two winners, as well as thousands of pounds’ worth of equipment, was shipped to 20 schools and academies across the country. The competition also had an extensive and impressive judging panel, including music industry professionals from 20th Century Fox, Sony ATV, Warner Chappell and the legendary musician, Dave Stewart.

Sophie, from the Wirral, is certainly bucking the trend of Millennials who, according to a survey published in The Independent, are prone to “job-hopping within the two-year mark”!

Small is also one of a growing number of young women working in technology, which, although being one of the fastest growing industries, still has had a significantly lower percentage of females than most other UK work sectors, at just 17% of Technology workers in the UK. The music industry is also similar, in terms of high-level female executives, but there are many women to aspire to, such as Amber Davies, Rebecca Allen and Stacey Tang to name a few.

Small cut her teeth in music as an intern and Artist liaison at Festival Republic, the country’s largest festival production company, originally founded as an offshoot of the Mean Fiddler Group. She worked her way through university at a law practice and as a talented rugby and tennis player, she’s also strategic, motivational, competitive and a great team player!