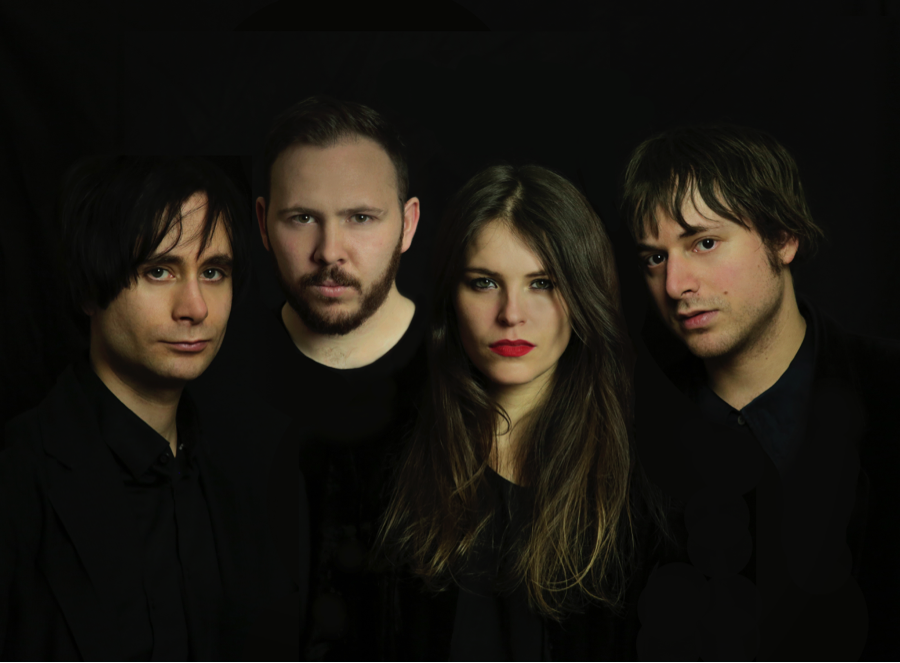 “Beautiful indie rock with a darker edge…File this one under psyche/folk/ambient and oh so great.”
Tom Haugen Inforty

“Emotive and spine tinglingly impactful, it’s impossible not to be moved by its beauty and power.”
Totally Fuzzy

“Stunning debut brimming with cinematic, diverse and haunting tracks that are akin to a mini movie soundtrack.” 55Factory.net

‘Between The Earth and Sea’ is the stunning debut from London based four piece Strangefruit distributed by AWAL. Each of the five tracks – ‘Tell Me, ‘Falling’, ‘Ghosts’, ‘Slowly Drift Away’ and ‘Sea of Fog’ are utterly compelling…darkly beautiful cinematic psyche rock that sounds like the perfect soundtrack to a David Lynch film. Unsettling, atmospheric, intelligent songs that enrapture and intrigue from the first listen.

‘Tell Me’ was recorded and produced at Abbey Road with Greg Wells (Adele/Rufus Wainwright/Katy Perry) while ‘Ghosts’ and ‘Slowly Drift Away’ were produced by Max Dingel (Goldfrapp/The Killers/White Lies). ‘Falling’ was self-produced and ‘Sea of Fog’ was produced by Pedro Andrade and Strangefruit.

The band has also released to critical acclaim it’s videos “Sea of Fog” which premiered in Wonderland Magazine and “Ghosts” premiering in Andy Warhol’s Interview Magazine, the beautiful Super 8 “Falling” and “Tell Me” the Abbey Road Sessions a documentary style video from AVID’s “A Band With a Dream campaign. Collectively they’ve had well over 300,000 views to date.

Front woman, lead singer, violinist and pianist Jenny Maxwell’s voice is quite simply astonishing. Emotive and spine tinglingly impactful, it’s impossible not to be moved by its beauty and power.

Strangefruit’s guitarist and back up vocalist Jamie Perrett and bassist Peter Perrett Jnr are the sons of Peter Perrett, singer of the iconic UK band The Only Ones and they were in the original line-up of Babyshambles. Rounding out the lineup is veteran drummer Jake Woodward.

The group has been mesmerizing audiences at UK clubs and festivals including Secret Garden Party, Camden Rocks, The Wilderness Festival, White Heat and more, have performed twice for John Varvatos, Ringo Starr “Peace Rocks” campaign and were the subject of Avid Pro Tools six part web series “A Band With A Dream, A Grammy Winning Producer, Abbey Road and Avid”. They’ve also already played with the likes of Florence and The Machine, Dizzee Rascal and many others.

From Strangefruit’s stunning debut EP; ‘Between the Earth and Sea’.
Available on iTunes

This track is featured on the band’s debut EP – ‘Between The Earth and Sea’ – available to download on iTunes now: http://smarturl.it/StrangefruitUKEP

It’s both mundane and strangely haunting to watch, which makes it right in line with how the band describes the single: “The song is an eerie flicker, a ghost, that lies somewhere between the dark and the night, unsettling and captivating at the same time.” Backed by Peter and Jamie Perrett (of Love Minus Zero and Babyshambles), Strangefruit is a young band with a mature sound that—like Warhol’s famous films—”draws you in and strips you off.” – Interview Magazine http://bit.ly/1epiOlU

“A grotesque banquet, a fallen angel, a lead singer pitched somewhere between Kate Bush and PJ Harvey — and everything filmed on location at a ruined, bombed-out church in Peckham. It’s not every day that a new band creates a video with the production values of a high-concept Tim Walker shoot, but we guess that comes naturally to Strangefruit.” – Wonderland Magazine

Strangefruit’s beautiful, enchanting track ‘Falling’ filmed on Digital and Super 8 by Vladimir Cerny on Studland Bay in Dorset, in August 2011 on the day of the London riots.

http://youtu.be/gus69wInglw –A Band with a Dream, a Grammy Winning Producer and Avid – (Promo Clip) for 8 part series for Avid –Pro-Tools

Ever wonder what it’s like to record at the world’s most famous recording studio? Or how a Grammy-nominated producer can pull the perfect performance out of any artist, including Katy Perry and OneRepublic?

Sign up to watch our exclusive, multi-episode series Inside Abbey Road Studios. http://www.avid.com/insideabbeyroad