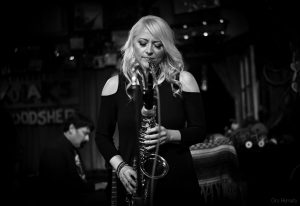 Suzanne Grzanna is a Multi-Award Songwriter, Saxophonist, Vocalist, Arranger, Producer, Music Publisher who composes (Music & Lyrics), and Grammy Member. She has eight Jazz albums released on her label Diva Records and has recorded over ninety songs in total of her own compositions and other musicians releases. Her music has been featured in many films and played across the globe on radio. She has also performed for many music festivals and private events. Suzanne loves to connect with the audience and share her love for music with them. She is very passionate in creating and loves being a part of the amazing musical community. Suzanne focuses on Jazz, EDM, and Downtempo Jazz.

Recently, Suzanne has been nominated for the 2020 Hollywood Music and Media Awards (Jazz – By The Fireside), Four nominations for the 2020 Indie Music Channel Awards ( By the Fireside and My Valentine), and recently won the 2020 Akademia Award for Best Visionary for Jazz. She has won over seventy awards in the last few years.

In film, Suzanne has collaborated with Two-time Billboard Top 20 Artist, Kim Cameron who just directed a feature film titled “Seaper Powers.” Suzanne co-wrote a song with John DePatie for this film titled “Sunrise” which has just been released in 2020. The movie soundtrack has already won numerous awards. Suzanne’s original composition Simply Sunday has been featured in the film “Wild Honey” that was released in 2019 (Director – Francis Stokes) and in the film short “A Different Direction” (Director – Colleen Ann Brah). Suzanne will also be working on “Western Conviction” (Director – Colleen Ann Brah).
Suzanne Grzanna was born and grew up in a small suburb of Milwaukee. Her parents Don and Maureen Grzanna are professional musicians and she started piano lessons with her mother when she was five.

While Suzanne continued playing piano during her teenage years, performing at many competitions, she began doubling on the clarinet when she was nine so she could play in her school bands. Suzanne switched her main focus to alto-sax in seventh grade. In addition to jazz and hearing her father perform, she enjoyed classical and the pop music of the era. A performer from a very young age, Suzanne sang and played piano in her family band, playing jazz, rock and dance music. She gained further experience playing in her high school band and singing in her high school choir. While in college she not only performed with the jazz band but the school’s symphonic orchestra and a Christian rock group. She also sang with the Milwaukee Symphony Chorus for many years, starting at the age of 18.

After attending Wisconsin Lutheran College and earning a music degree from Carroll University, she formed her jazz quartet. Suzanne immediately started a busy performance schedule, and she has not slowed down since. Suzanne has an upcoming role in the new film “Western Conviction” that will film in 2021. Her new jazz album will also be released in 2021.