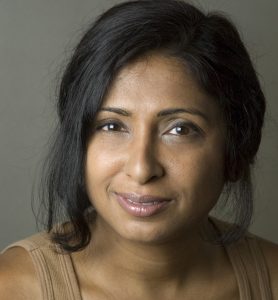 “I don’t consider myself an innovator or inventor; I’m more of an identifier of opportunities,” states Tanvi Patel, the CEO of CrucialMusic, whose February launch of CrucialCustom brings a marketplace of composers to advertising agencies who need music for their ads. “I saw ways to improve the music house model bolstered by technology without the limitations of space, and the benefit of minimal, quality crowdsourced suppliers.”

This ability helped Patel build a career in one of the most highly competitive spaces in the music business, piece by piece, by learning all sides of the industry firsthand, from publicity to licensing.

Growing up in a family originally from Gujarat, India, Patel learned what hard work and diverse experience could mean. She watched her dedicated parents move from poverty to prosperity in the US, thanks in part to her enterprising father who balanced several small businesses with his full-time medical practice. “His example always guided my career,” she explains, “It urged me to love what I do, which led me down many paths, all compounding my experience, and to aspire to work for myself.”

Patel thought she’d become a doctor like her father, one of the professional paths advocated by her family. But as she got to college and began signing up for the requisite biology classes, she began to move in other directions. “After I floated around with no major for a while, I realized I loved broadcasting,” recalls Patel.

That desire, coupled with a love of music, drew Patel to radio. Her road eventually led from a public radio station in Cincinnati to Nashville, where she worked as a publicist at a label and for world-famous maker of electric guitars, Gibson. Then one day, she found herself in an interview with Jim Long, an established broadcast and music industry entrepreneur/innovator. He hired her on the spot. “She impressed me incredibly,” Long remembers. “And in Nashville, she didn’t have it easy. Even with an MBA, as a woman of color, she had to push to get into some of the good old boy networks.”

With Long’s mentorship, Patel managed to do just that. She learned the ropes of everything from radio promo to ringtone deals, and, with time, moved into the music library business and scored placements in major films (Brokeback Mountain) and television series (The Simpsons). As her career developed, she saw an opportunity. The market for music for images was changing dramatically, and Patel knew what to do about it.

Part of the field’s transformation lay in improved recording technology for nontraditional studios, and part in the shifting tastes of viewers. “Home recording had reached such a level that musicians could create great home recordings that sounded pro,” recounts Patel. “At the same time, supervisors started looking more and more frequently for something other than a library vocal or instrumental. There’s magic, there’s soul to an independent song. I saw that trend, that the supervisors coming for classical music were also asking for indie artists.”

Patel saw that she needed to focus on quality, on musicians with distinct voices and strong production quality. She decided to attract this kind of independent artist by offering a non-exclusive license with a generous split, a deal type still in its infancy. It was a model that gave artists more flexibility and allowed them to work with several companies at once for maximum revenue opportunities–and it was a model that did not sit well with established large publishers and music libraries.

“The non-exclusive model is the key to great music,” she notes. “The artist has the ability to place their songs with a variety of companies, providing the artist the opportunity to make money in multiple markets, capitalizing on the strengths of many rather than one.”

Patel started out with 200 songs. Then word got out, and artists began flocking to CrucialMusic. They built a reputation for being highly selective, and highly effective. “Word of mouth helped spread the Crucial story of 200 songs to over 12,000 carefully selected tracks today,” Patel says. “Submissions grew from 2 to 3 a day to hundreds each week, creating a 3-month backlog for our selection process.”

That was ten years ago. Crucial’s approach faced some bumps, as the company figured out how to curate efficiently, and how to be sustainable in an environment of large-scale blanket arrangements and massive libraries. Patel faced these obstacles and unknowns with remarkable energy and intelligence. “She’s got a laser focus,” says Long. “I can’t tell you how strong she is in the way she works with people. The money is secondary to her. She loves repping indie artists, shielding them from all the problems inherent in this business.” This intensity led to a placement record that reads like a best-of list for contemporary television and film: Orange Is the New Black, Gravity, Scandal, Boardwalk Empire, among many others.

The music for image world is shifting again, with the ongoing evolution of digital advertising. Patel saw yet another opportunity, this time in the custom music realm. Instead of low prices (and often concurrent low quality) or high-profile but budget-busting composers, Patel is working with a trusted stable of artists to bring that same artist-friendly, high-quality approach to work-for-hire. It turns out CrucialMusic was just the beginning. With CrucialCustom, Tanvi Patel is taking the lead once again.

About CrucialCustom
CrucialCustom is the first custom music marketplace to provide advertisers and music supervisors with quality, affordable music curated by experts for effective and memorable ad campaigns. Headquartered in the heart of the music industry in Los Angeles, Calif., CrucialCustom has years of experience identifying, vetting and commissioning composers from a global network whose independent creativity can capture the hearts and minds of audiences. CrucialCustom allows advertisers to commission these eclectic composers for their exact needs. CrucialCustom’s experienced team ensures that every track submitted to the marketplace meets high standards for production quality and is copyright safe. Over the past decade, parent company CrucialMusic has helped agencies and music supervisors license thousands of tracks for their ads, videos, TV shows and films. CrucialMusic has placed songs in ads for Toyota, Chrysler, Ralph Lauren, Old Navy and many others. www.crucialcustom.com