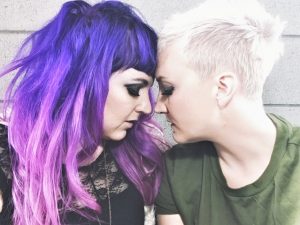 ‘In this crazy world we seem to have found ourselves living in, Unsung Lilly are the poster child for truth, empowerment and the magic of love knowing absolutely no boundaries. Their music is epic, their voices reach to the depths of your soul, and lyrically – well lyrically they are a leading voice of (r)evolution!’

British music artistes Sera & Frankie begun making music together back in 2012 (along with their then-boyfriends), however to everyones surprise, a few years into the project the girls fell madly in love, the rest of the group disbanded, and so the girls moved over to California to work on developing their music.

Now wife and wife, Sera & Frankie create epic and empowering pop anthems with soul, inspiring passionate followers from the women’s empowerment movement, and of course the LGBTQ community amongst others. Their message that ‘love knows no boundaries’ is one that has ignited thousands of their fans around the world.

Multi-instrumentalist Frankie performs the majority of the instrumentation on the records, and produces the songs with a mix of epic modern sounds and layers, fused with an oldskool soulful feel that appears to have been lost in a lot of today’s pop music, whilst Sera pens intelligent and socially conscious lyrics that speak to the empowered and evolving voices of today and tomorrow. The acclaimed Unsung Lilly live show is packed full of anthemic hits, Goddess-imagery inspired costumes from Sera, and Frankie hopping from instrument to instrument.

In 2018, Unsung Lilly placed 7 of their songs in award winning movies, and two in a trailer. Unsung Lilly’s music has received independent radio play all over the world, and the girls have performed at some of the UK’s top festivals, including Belfast Pride, Guilfest, Weyfest, and Magic Summer live. 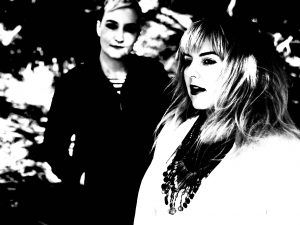 After successfully completing a ’12 songs in 12 months’ challenge, where the girls wrote, recorded and released a song every month for a year between 2017-2018, their album ‘Twelve’ was released world wide on June 21st, 2019 (which features the twelve songs from the challenge plus two bonus tracks), followed by the powerful anthem ‘Demons’ later in 2019 (co-produced by Tim Sonnefeld and mastered by the legendary Howie Weinberg)

Following a strong start to 2020, with an independent music award nomination and a song placement in Hollywoods latest TV sensation ‘Katy Keene’ in hand, everything changed with the global pandemic. Mid-way through the creation of their new album, the girls had to give up their life in the United States and move back to the UK, where they are now finishing their new album and expected to be releasing in Spring 2021. The working title for the album is ‘Uprooted’ to represent the energy of the albums creation process being interrupted.