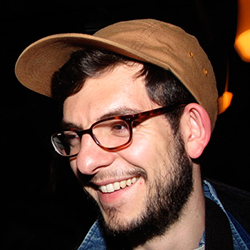 Born in Chicago and raised in the ‘burbs, Zach Pollakoff was a music person from early on. Though an avid live music fan and in bands throughout Junior High and High School, it was in college at Indiana University when it really became his life.

As a DJ–and later the General Manager–at student station, WIUX, he learned about more about music than ever before. He helped the station make the move to FM and then fought alongside state legislators to keep them there.

After a stint of LPFM advocacy, Pollakoff moved to Brooklyn to work for indie giant, Beggars Group/Matador Records as a radio and video promoter. From Beggars, Pollakoff proudly founded Twosyllable Records, a finely curated collection of some of his favorite young artists.

Later that year, while working on supervising a film–and founding his band, Eastern Midwestern–Pollakoff was introduced to the advertising industry. He spent a few years working at music and film production companies with some amazingly talented people before landing at Grey Group in 2010.

At Grey, Pollakoff has worked closely on Cannes-Lion-winning work for DirecTV, E*Trade and the NFL and has most recently won an Emmy for his work with Canon.