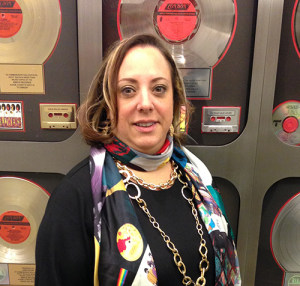 Alisa Coleman is the Chief Operating Officer of ABKCO Music & Records, Inc., overseeing the day-to-day operations as well as the business development and global licensing of the music publishing, record, and film catalogs for one of the foremost independent entertainment companies in the world. ABKCO’s catalog includes compositions, recordings, and films by Sam Cooke, The Rolling Stones, Bobby Womack, Eric Burdon, The Animals, Herman’s Hermits, Marianne Faithfull, Pete Townshend, Ray Davies, and The Kinks; the Cameo Parkway master recordings; and the works of cult director Alejandro Jodorowsky.

Coleman first joined ABKCO in 1985, as an assistant in the licensing and royalty departments, and has gone on to work in every division of the company. In 2016 she was named the company’s first COO. During her tenure at ABKCO, she has greatly expanded the exposure of the company’s legendary catalog, increasing its reputation and value, and is known for her innovative deal structures that focus on the long-term value of intellectual property and licensing partnerships.

A key element in Coleman’s strategy is to find inventive ways to introduce ABKCO’s catalo to new generations. She says, “With many of our assets more than 50 years old, our challenge is how to keep these songs and films vital and exciting. I’m constantly looking for ways to reimagine them, with deals that connect all the dots – audio, video, and composition – to maximize revenue, interest, and exposure for this amazing catalog.”

ABKCO had been historically reticent with synch, digital, and derivative work licensing; in the first five years Coleman ran the licensing department, she was able to quadruple their synch licensing by building bridges back into the music supervision community and expanding into the new media and technology arenas. She likes to make deals that go beyond licensing to include promotional components, working with the licensing partner to find the best path to success for the song, the partner, and for ABKCO.

For example, in 2014, Lyric Culture wanted to license Mick Jagger and Keith Richards’ song lyrics for use on different merchandise. Coleman went with Lyric Culture to the Home Shopping Network (HSN) to create a special program that included ABKCO’s other Rolling Stones audio and video assets. The November broadcast was one of the most successful in HSN’s history, selling out all the products halfway through the 90-minute show. Every sale also included a download card, furthering the cross-promotion of ABKCO’s Rolling Stones catalog. Coleman says, “In working with composition assets, music publishers need to look past traditional licensing and drive opportunities to increase exposure and revenue for songs by cross branding and promotional opportunities.”

Another fresh take on Rolling Stones iconography and music which she conceived with Fender Guitars is the 2013 “Clearly Classic” “Beggars Banquet” Stratocaster package. The album art was printed directly on the guitar’s entire body and pickguard, the first time the process was used, and sold in a special package with a clear vinyl copy of the album.

More recently, the Jagger/Richards song “I’m Free” – originally recorded by The Rolling Stones and popularized by the Soup Dragons in the 1990s – has found yet another new life in the January 2016 Norwegian Cruise Line “Feel Free” campaign. Rapper Pitbull incorporated elements of the song into a new track, “Freedom,” taking it to an entirely new listener base 50 years after the initial release. Internationally, Sam Cooke’s composition “Bring It on Home to Me” was featured in a Coca-Cola spot throughout 2015. Back in 2004, Coleman pioneered the on-screen identification of song titles in TV commercials with ”Jumping Jack Flash” in Guy Ritchie’s Corvette commercial, making it easy for viewers to learn about the music and further the song’s promotion.

Coleman began ABKCO’s soundtrack division in 2007, and recent notable releases include David O. Russell’s “Joy,” released Christmas 2015; Wes Anderson’s “The Grand Budapest Hotel,” which won the 2015 Oscar and GRAMMY awards for its score; the 2013 Academy Awardnominated “Moonrise Kingdom”; 2013 Independent Spirit Award winner “Safety Not Guaranteed” and nominee “Frances Ha”; and Martin Scorsese’s “Boardwalk Empire.” Also in 2007, Coleman negotiated the first-ever episodic segment release on iTunes for the soundtrack of the then-unknown Showtime series “Californication.” The soundtrack was released in three segments during the debut season along with video from the show, culminating in the full soundtrack release in all formats. Another recent partnership is with Mattel and ABKCO’s Little World label imprint, with ABKCO releasing the soundtracks for its “American Girl,” “Barbie,” and “Monster High” lines.

Coleman is also an accomplished art director, with over 30 release designs to her credit, including all of the Rolling Stones Remastered Series CDs and the Grammy-winning DVD “Sam Cooke Legend.” Her work in this area has been recognized by the Clio Awards, New York Art Directors Club, the AIGA, and many more.

She is currently a board member of the Association of Independent Music Publishers (AIMP) in New York; a member of NARAS, AIGA, NYWIFT, CMA, and CSUSA; and a lifetime member of the Songwriters Hall of Fame. Coleman is a committee member of the Impel Advisory Group and part of the NMPA’s Copyright Royalty Board Working Group. She has also been a participant in the U.S. Copyright Office roundtable discussions on licensing and is a frequent speaker at universities and industry events, including SXSW, A2iM Indie Week, AIMP panels, and the Guild of Music Supervisors.

A graduate of The Hartt School of Music at The University of Hartford, which recognized her in 2014 with the Anchor Award, the university’s highest alumni award, Coleman began her career at The Harry Fox Agency co-directing the synchronization licensing department while interacting with music publishers and production companies to negotiate music rights.