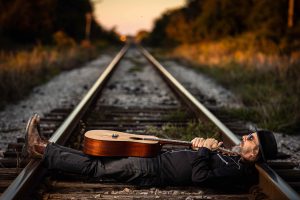 Barry James Payne is an award winning musician and artist from Ontario, Canada, who has performed in several projects, most notably, his solo North Americana band String Bone and his Celtic-fusion group Rant Maggie Rant.

His latest project, B>A>G Music Productions with award winning Las Vegas-based producer/composer George Leger III, has landed them an exclusive multi-song deal with Vo Williams’ fledgling sync agency Sound Dose Music Group out of LA. While Payne & Leger continue to write and pitch for sync, some of their best songs are still sitting in the hopper ready to be signed.

Payne’s String Bone has released 5 singles and 14 videos on digital platforms throughout 2020, 2021, 2022; “Two Stars Collide” (with accompanying video), a collaboration with drum and bass producer Nathan McKay, “A Lot More Better” a co-write with Jay Reihl, “Waitin’ For My Dyin’ Day” (with video) with George Leger III, a cover of Ferron’s “Ain’t Life A Brook” (with video) and the insane and bombastic danceable ‘Wow! Oh Yeah!’. These singles will make up two full-length waterfall releases scheduled for June 2022 – “Coping Mechanisms”, a collection of original songs, and “Cover-Up Conspiracy Theory” an album dedicated to Payne’s early songwriting influences.

Payne has been writing music and performing live for four decades and has co-produced and released two full length String Bone albums, ‘nadir’ (2009), ‘Love & Highways’ (2016) and has performed internationally in the US, Europe and across Canada throughout his career. Payne is a core member of Canadian Celtic-Roots band ‘Rant Maggie Rant’, who has performed with several orchestras and in many theatres across Canada and the US. His songs have been featured on three of their recordings. He also produced their last two albums.