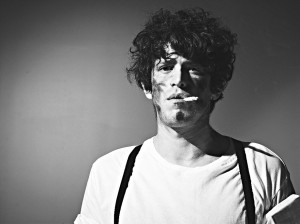 Bosco Delrey, producer and purveyor of experimental pop and rock n roll, was discovered in 2009 by the superproducer Diplo who released his first Memphis recorded LP on the Mad Decent imprint. After touring from the US to Moscow and supporting other genre-blurring acts like Sleigh Bells and CSS, he’s set to release his newest Paris recorded LP, The Green Tiger’s Alibi in March 2014.

Hailing from New Jersey by way of everywhere, Bosco’s production and musicianship reference the sounds of Sun Studios-era recordings, southern rap, church hymns and dancehall, updating lo-fi guitar twang with pop beats and vintage synthesizers to create a wall of distorted dance- grunge. This seemingly impossible alchemy first materialized in late 2010 with a pair of stellar 7- inches that quickly caught the attention of Mike D and Ad Rock of the Beastie Boys, each of whom remixed a track. Of late, Bosco was asked by Benjamin Biolay to remix his ballad “Confettis” and also was commissioned to make a song for the True Blood TV series. His first album, Everybody Wah, even found a path to the silver screen with the help of legendary director Terrence Malick.

During the summer of 2013,The Green Tiger’s Alibi was recorded in Paris for the Belleville Music label at the legendary CBE Studio where everyone from Serge Gainsbourg and Lee Hazelwood to Sebastian Tellier have recorded. This album sees the crystallization of what Los Angeles’s KCRW has called “perfectly surreal pop beat troubadourism for modern America….Hopeful, absurd, shambolic, catchy, and lean….great for singing along while tearing your bills and job applications into party confetti!”

After a headlining performance at Hall 3 of the Transmusicales de Rennes, a festival performance in Brazil, and an upcoming co-headling tour with Har Mar Superstar for the Nuits de l’ Alligator Festival, his newest and rawest recordings will be primed to explode onto the scene.

“[Bosco is] a sort of garbage can Elvis from New Jersey… teaspoon craziness, a pinch of rockabilly, and full cup of soul dressed in a leather jacket. He can’t be topped as far as song writing… He’s doin’ the music I wish I could if I had bought a guitar.” -Diplo

“The future is looking bright for this hillbillyhall pioneer.” – Dazed & Confused