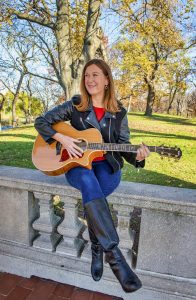 With 4 albums of original music and singles and several collaboration pieces published, NJ based singer songwriter Chrissy Roberts is a prolific artist whose songs resonate deeply with listeners. With a church choir trained voice and an original flat picking guitar style, she creates a unique sound to accompany thought provoking poetic lyrics.

Chrissy’s most recent full album release “Songs on the Fire Escape (2019) explores a variety of genres and moods. From the sultry “Landscape” to the country sounds in “The Sun Won’t Shine” and “Fire Escape”, the album never rests on a single style but evolves throughout the work.

The NJ based singer songwriter and guitarist recent releases include the original single “Pandemic Year” (2020). In addition a collaboration of Jingle Bells (2020) and a collaboration on a cover of “Oh Little Town of Bethlehem” on the album called “Christmas Reimagined” by Chu the Producer rounded out releases in 2020..

Chrissy’s work as a Occupational Therapist for children informed the learning based movement and music songs in “Kid Notes”. Her other albums “Patchwork” and “Handcrafted” show earlier musical stylings as well as Chrissy’s essential folk roots.

Chrissy has an original playing style of flat arpeggio picking, that creates textured acoustic layers. She combines this with her poetry and her church choir trained voice resulting in powerful and thought provoking performances.

Chrissy has enjoyed performing in venues in the NY/NJ area solo and with her band including The Bitter End, The Fox and Crow, White Eagle Hall, Folk Project NJ, The Stanhope House and others.

Chrissy is happy to continue creating and collaborating on a variety of new covers and originals for streaming and sync.