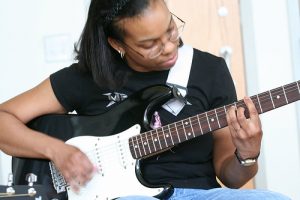 Christina Meyer is originally from Chicago but now lives in the Milwaukee area. She started writing lyrics as a teen and has continued to develop and strengthen her songwriting skills over the years. She collaborates with several co-writers but also writes on her own. Her main instrument is guitar but she can also play bass guitar and drums. She loves all types of music and writes in several different genres of music including pop, rock and country. Some of her influences are Rob Thomas, NKOTB, Metallica, Diane Warren, Richard Marx, Lionel Richie and Prince. She writes great songs that she hopes will find placements in film/tv and ads. She has a fresh sound with melodies that can sometimes be upbeat and sometimes dark. She has had song placements in The Young & The Restless and Whiskey Cavalier and has also had a few indie artist cuts.