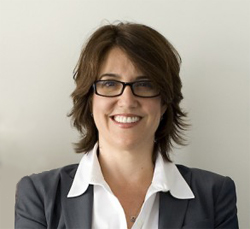 Christine Russell is the Co-founder of Evolution Music Partners (EMP) and Founder/COO of Score Revolution.

Score Revolution is an innovative online licensing platform for film music that launched in 2013 and has aggregated over 12,000 tracks from independent and major production companies from around the world, including Lionsgate, Lakeshore, Studio Canal, Constantin Films, and Warner Chappell Music Publishing. In 2004, Christine formed talent agency Evolution Music Partners (EMP) with founding partner Seth Kaplan.

Christine began her career in the music industry as a singer/songwriter. She released two albums with Morgan Creek and signed a publishing deal as a staff songwriter for Herb Alpert and Jerry Moss’ Rondor Music, where her catalog garnered numerous film and television placements.

Christine’s eventual transition from artist to agent began with the formation of her company Bully Music in 1997. Her original client roster included legendary lyricist Gerry Goffin of the husband and wife songwriting team Gerry Goffin and Carole King, whose extensive catalog she has managed for over 15 years. Christine is the Executive Producer of Beautiful: The Carole King Musical that opens on Broadway in January 2014.