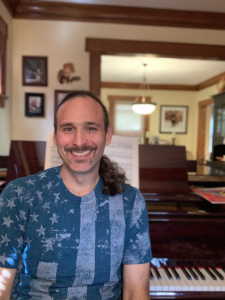 A singer, songwriter and pianist/keyboard player, David’s talent and versatility are just a part of his family legacy. His father was a composer/conductor/arranger/pianist who studied under Paul Hindemith at Yale and wrote music for 20th Century Fox and NBC. His great uncle Louis Silvers was an Oscar-winning musician “One Night of Love” and the genius behind the score for the groundbreaking first “talking” movie “The Jazz Singer” (1927) with Al Jolson, and the composer of such classic songs as “April Showers”.

David is equally at home writing driving anthemic rock songs, singer-songwriter ballads, funky, soulful jazz-influenced tunes, or melodic solo piano underscores. Torn between his passion to compose and perform he was awarded first place in the Hutchinson piano competition two years in a row and he won 2nd place in an original music contest judged by Trish Frisbie and Eugene Foley. David Easton Band was also a finalist at the Hard Rock Café Battle of the bands.

An avid lover of animals, David’s childhood plans of becoming a veterinarian gave way to his love and passion for music, but also to his inability to stomach the blood!

Here’s what people say about David:

“There’s something pure about David Easton. He seems to have a direct connection to his soul when he sings and plays. His talent as a vocalist and keyboardist as well as the light inside him are undeniable.”

“The David Easton Band is… exciting jazz-pop…. sophisticated original tunes. David is a dynamo on vocals and keyboards… infectious…sure to please. Don’t miss this group!”

You will find David is easy to work with and he looks forward to partnering with you to help meet your musical needs with some one-stop music and in whatever way he can!