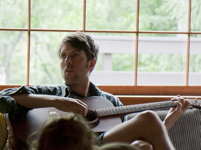 As Leo Burnett’s Vice President and Music Director, Gabe McDonough brings a wealth of music industry knowledge and talent to the agency. At Burnett, McDonough sources music and negotiates deals for some of the world’s biggest brands including Allstate, Sprint, Samsung, Hallmark, Delta Faucet, Esurance, Nintendo, Kellogg’s, and McDonald’s among others. He is also one of the leaders of Leo Burnett’s “Artist in Residence” programs that brings popular and up-in-coming artists (including Steve Earle, Kat Dahlila, RJD2, MNDR among many others) to the agency for guest performances and builds artist/agency relationships.

This year, McDonough’s work for the Sprint/HTC EVO 4G LTE launch captured the award for “Best Music Placement in an Ad” at the 2013 Midem Marketing Competition.

A well-known name in the music industry – former VP/Senior Music Producer at DDB Chicago and the promotions director for Chicago’s legendary live music venue, the Empty Bottle – McDonough’s collaborative style and strong artist-producer relationships have established him in both the advertising industry and independent music communities at the national level. He is currently a Governor for the Chicago Chapter of the Recording Academy.

In 2009, Adweek recognized McDonough’s use of Os Mutantes song “A Minha Menina” in a McDonald’s commercial as being one of the five best ad songs of all time. By including song “Lights Out” in Bud Light Lime commercials, music artist Santigold was catapulted to fame with subsequent press citing the ads in the making of her success.

McDonough shares his music knowledge with many publications, including Billboard, Paste Magazine, Brandweek and is a frequent contributor to Time Out Chicago. In 2012, Billboard named him one of their 40 Under 40 Power Players on the Rise.