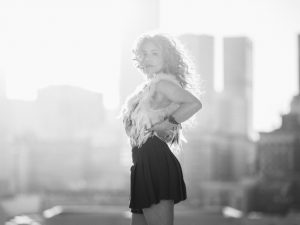 Haley Reinhart, 25, is a singer/songwriter who released her debut album, Listen Up!, in 2012 on Interscope Records and 19 Recordings. The record garnered significant critical acclaim, debuting at #17 on the Billboard 200 chart. Her new EP, Better, will be released in 2016 via ole and red dot.

Reinhart grew up in Chicagoland, born into a world of music. Singing at the young age of 7, she began to take the stage alongside her parents and their band of 30 years: Midnight. Thanks to her parents’ diverse musical taste, Reinhart became heavily influenced by a wide variety of genres, including rock ’n’ roll, funk, pop, jazz, and the blues. She hit the big stage with the Wheeling High School jazz band, which toured across Europe in 2009, performing at both the Montreux Jazz Festival and Umbria Jazz Festival.

Reinhart continued to study jazz in college, forming several bands and side collaborations. In 2011, she competed on Season 10 of landmark TV singing competition series American Idol, eventually finishing in third place. Since then, she has signed a deal with ole and red dot, which has enabled her to travel the U.S. and abroad to work with the best international writers and producers. As a result of these collaborations, Reinhart and ole have had incredible success in the world of synch placement, most recently with her cover of Elvis Presley’s “Can’t Help Falling in Love,” which appeared in a TV ad for Extra Gum that has racked up nearly 13 million views on YouTube. Her songs have also been featured in a variety of other TV and film projects, including James Cameron’s HBO documentary series Years of Living Dangerously, a recent Chase Bank commercial, and the film “Step Up Revolution.”

Reinhart has built up a strong and devoted fanbase of “Haliens” thanks to live performances at festivals such as Lollapalooza and the New Orleans Jazz Fest. She has also collaborated live with some of the biggest names in the business, including Tony Bennett at the Nokia Theatre in Los Angeles, Slash at the MGM Grand in Las Vegas, David Foster at the Celebrity Fight Night charity event, and Irvin Mayfield and the New Orleans Jazz Orchestra at Carnegie Hall in New York City.
In addition to singing, Reinhart will make her voiceover debut on December 18th as a little boy named Bill in the Netflix original animated series F Is for Family, produced by Bill Burr, Vince Vaughn, Peter Billingsly, and Michael Price. She is also touring North America this fall with viral jazz-pop sensations Scott Bradlee’s Postmodern Jukebox.