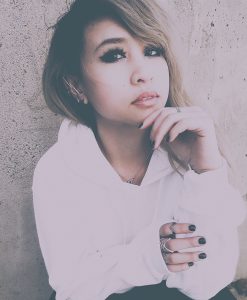 Janel Nabong is an Indie American singer-songwriter, composer, and producer. Her music deals heavily with topics surrounding mental illness, personal struggles, and personal growth. The young artist started playing piano at the age of three, and was playing guitar and singing by fourteen. She started creating music by herself in her bedroom, and later started growing an international following with her mix of synth pop, electronica, hiphop and alternative rock. She got her start posting cover songs on Youtube, which soon evolved into regular music live stream performances on her YouTube channel which has over a half million views, and on Twitch.

“This girl is commanding her voice.. All I can see when I watched her sing.. was a person who’s going to be standing in a stadium of people.. This new EP that she’s got is going to be fantastic, I can’t wait for it.”
– Brett Manning, celebrity vocal coach

With her songs often talking on subjects like struggle and mental illness, her vision is to help and relate to others who are going through tough times themselves. She notes that music is one of the only places she can truly express herself and share her innermost thoughts and feelings with the world.

Janel first made her mark in March of 2019 with her single, “Hear Me”, and followed up with her first album release, “Temperamental” in July of 2020. In January of 2021, she released her single “Nod My Head”, and there are talks of a 2nd album release further into 2021